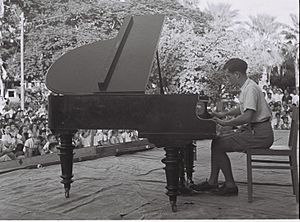 Alexis Weissenberg (26 July 1929 – 8 January 2012) was a French pianist of Jewish-Bulgarian descent. Technically brilliant, his playing was often described as cold and precise. Weissenberg was born in Sofia and in 1941 was sent to a concentration camp with his family. A guard liked his playing and helped the family escape to Turkey, and then to Jerusalem. In 1946 he moved to New York and studied at the Julliard School of Music. He toured for about ten years, but then did not play in public until 1966 when he performed with Herbert von Karajan in Berlin. He finally settled in Spain, but rarely performed in public.

All content from Kiddle encyclopedia articles (including the article images and facts) can be freely used under Attribution-ShareAlike license, unless stated otherwise. Cite this article:
Alexis Weissenberg Facts for Kids. Kiddle Encyclopedia.