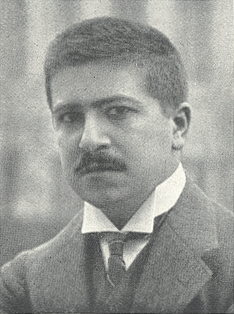 Artur Schnabel when he was about 24

Artur Schnabel (April 17, 1882 – August 15, 1951) was an Austrian classical pianist, composer and teacher. He was one of the best pianists of the twentieth century. He was a very serious pianist. He did not try to impress people by playing fast or loud. He was most famous for playing music by Mozart and Beethoven and Schubert.

The place where Schnabel was born was called Kunzendorf. It was near a town that was called Bielitz, in Austria-Hungary. Now Kunzendorf is called Lipnik, and Bielitz is called Bielsko-Biała, and it is in Poland. When he was two years old his family moved to Vienna. He started to play the piano when he was four. When he was nine he started to take piano lessons with the famous teacher Theodore Leschetizsky. He studied with Leschetizsky for seven years, until 1897. He also studied music theory and composition with Eusebius Mandyczewski. He gave his first concert in Vienna in 1897. After that he played more concerts in Budapest and Prague and Brno.

Schnabel moved to Berlin in 1898. He started to be famous from concerts with the Berlin Philharmonic Orchestra and from playing chamber music. He liked playing chamber music and he played it for all his life. Some of the famous musicians he played chamber music with were Carl Flesch, Joseph Szigeti and Bronislaw Huberman (violin), Paul Hindemith (viola), and Pablo Casals, Gregor Piatigorsky and Pierre Fournier (cello). He also played piano for the contralto singer Therese Behr (1876-1959). In 1905 he married her. They had two sons. Karl Ulrich Schnabel (1909-2001) was a pianist and Stefan Schnabel (1912-99) was an actor.

In 1933 Adolf Hitler became the leader of Germany, and Schnabel, who was Jewish, moved to England. He moved to the United States in 1939. After the end of World War II he went back to Europe. He gave concerts there and in the United States for the rest of his life. He died in Axenstein, Switzerland, in 1951.

All content from Kiddle encyclopedia articles (including the article images and facts) can be freely used under Attribution-ShareAlike license, unless stated otherwise. Cite this article:
Artur Schnabel Facts for Kids. Kiddle Encyclopedia.