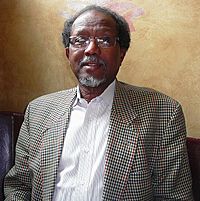 Ali Khalif Galaydh (Somali: Cali Khalif Galaydh, Arabic: علي خليف غلير‎code: ar is deprecated ) (October 14, 1941 – October 8, 2020) was a Somali politician. He was the Prime Minister of Somalia from October 8, 2000 to October 28, 2001. He was a member of the Federal Parliament of Somalia from 2012 until his death. He was also President of the Khatumo State between 2014 until his death. Galaydh was born in Las Anod, Somalia.

All content from Kiddle encyclopedia articles (including the article images and facts) can be freely used under Attribution-ShareAlike license, unless stated otherwise. Cite this article:
Ali Khalif Galaydh Facts for Kids. Kiddle Encyclopedia.