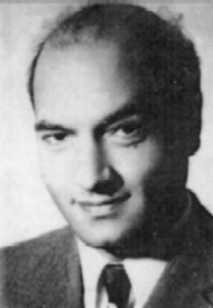 Shariati was born in 1933 in Mazinan, Iran. He studied sociology in the University of Paris. He returned to Iran in 1964. When he returned to Iran, the Shah regime arrested and imprisoned him for political reasons. He was released in 1965. Shariati began teaching at the University of Mashhad. He began lecturing at the Hosseiniye Ershad institute in 1967. The Shah regime arrested him again. When he was freed in 1975, he was not allowed to teach or publish anything. Shariati decided to leave the country for England. Three weeks later he died in Southampton under suspicious circumstances. He was buried in Damascus, Syria.

All content from Kiddle encyclopedia articles (including the article images and facts) can be freely used under Attribution-ShareAlike license, unless stated otherwise. Cite this article:
Ali Shariati Facts for Kids. Kiddle Encyclopedia.