Alice Through the Looking Glass (2016 film) facts for kids

Alice Through the Looking Glass is a 2016 American live-action/animated fantasy adventure film directed by James Bobin, written by Linda Woolverton and produced by Tim Burton, Joe Roth, Suzanne Todd, and Jennifer Todd. It is based on the characters created by Lewis Carroll and is the sequel to the 2010 film Alice in Wonderland, a live-action reimagining of Disney's 1951 animated film of the same name. The film stars Johnny Depp, Anne Hathaway, Mia Wasikowska, Matt Lucas, Rhys Ifans, Helena Bonham Carter, and Sacha Baron Cohen and features the voices of Stephen Fry, Michael Sheen, Timothy Spall, Barbara Windsor, Matt Vogel, Paul Whitehouse, and Alan Rickman. This also features Rickman and Windsor in their final film roles prior to their deaths.

In the film, Alice comes across a magical looking glass that takes her back to Wonderland, where she finds that the Mad Hatter is acting madder than usual and wants to discover the truth about his family. Alice then travels through time (with the "Chronosphere"), comes across friends and enemies at different points of their lives, and embarks on a race to save the Hatter before time runs out.

The film premiered in London on May 10, 2016, and was theatrically released on May 27, 2016 by Walt Disney Studios Motion Pictures. Alice Through the Looking Glass received generally negative reviews from critics, with praise for its performances and visual effects, but criticism for its story and characters. The film grossed over $299 million on a budget of $170 million.

Alice Kingsleigh has spent the past three years following her father's footsteps and sailing the high seas. Upon her return to London from China, she learns that her ex-fiancé, Hamish Ascot, has taken over his deceased father's company and plans to have Alice sign over her father's ship in exchange for her family home. Alice follows a butterfly she recognizes as the Caterpillar and returns to Wonderland through a mirror. Alice is greeted by the White Queen, the White Rabbit, the Tweedles, the Dormouse, the March Hare, the Bloodhound and the Cheshire Cat. They inform her that the Mad Hatter is acting madder than usual because his family is missing. Alice tries to console him, but he remains certain that his family survived the attack of the Jabberwocky. The White Queen, believing that finding the Hatter's family is the only way to restore his health, sends Alice to consult Time and convince him to save the Hatter's family in the past. The White Queen warns Alice that history will be destroyed if a person's past and present selves meet. Upon entering the Castle of Eternity, Alice finds the Chronosphere, an object that controls all of time in Wonderland.

After Time tells Alice that altering the past is impossible, she steals the Chronosphere and travels back in time, shortly after finding the exiled Red Queen in Time's care. The Red Queen orders Time to pursue Alice, who accidentally travels to the Red Queen's coronation. There, a younger Mad Hatter mocks the Red Queen when the royal crown does not fit her abnormal head. When her crown breaks, the Red Queen throws a tantrum that causes her head to swell. Her father deems her unfit to rule and passes the title of queen to her younger sister, the White Queen. Alice learns of an event in both the Queens' pasts that causes friction between the two, and she travels back in time again, hoping to change the Red Queen's character and cease the Jabberwocky from killing the Hatter's family. The young White Queen steals a tart from her mother and eats it. When confronted by their mother, she lies about eating the tart, which gets her sister accused and causes her to run out of the castle in a fit. Alice sees her about to run into a clock and believes this to be the event that deforms her head and personality. She manages to move the clock out of the way, but fails to change the past as the Red Queen stumbles and hits her head anyway.

Alice is confronted by a weakened Time, who berates her for putting all of time in danger. She runs into a nearby mirror back into the real world, where she wakes up in a mental hospital, diagnosed with female hysteria. With the help of her mother, she returns to Wonderland, where she travels to the Jabberwocky attack and discovers that the Hatter's family did not die, but were captured by the Red Queen's Red Knights. Returning to the present, Alice discovers the Mad Hatter at the brink of death. After Alice tearfully says that she believes him, the Hatter awakens and reforms back to his normal self. The Wonderlanders go to the Red Queen's castle and find the Hatter's family shrunk and trapped in an ant farm. The Red Queen apprehends them and steals the Chronosphere from Alice, taking her sister back to the day she lied about the tart. By the time Alice and Hatter get there, the Red Queen and her past self see each other. This creates a time paradox, and Wonderland quickly turns to rust. Using the Chronosphere, Alice and the Hatter race back to the present, where Alice is able to place the Chronosphere back in its original place. With the Chronosphere stabilized, Wonderland reverts to normal. The Mad Hatter reunites with his family. The White Queen apologizes to her sister for lying, and both of them make amends. Alice bids her friends farewell and returns to the real world where her mother refuses to turn Alice's ship over to Hamish, and the two set to travel the world on behalf of their own company. 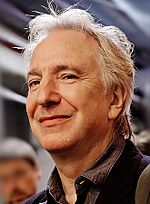 This film marks the final performance of actor Alan Rickman, who died four months before the film's release. 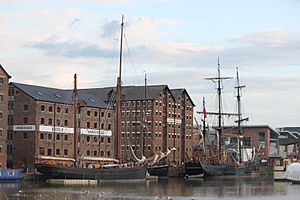 Tall ships in Gloucester Docks for the filming of Alice Through the Looking Glass. August 2014

In July 2013, it was announced that Johnny Depp would return as the Hatter, with Mia Wasikowska's return confirmed the following November. In January 2014 Sacha Baron Cohen joined the cast to play Time. In May 2014, Rhys Ifans joined the cast to play Zanik Hightopp, the Mad Hatter's father. In developing the character of "Time", Bobin sought to avoid creating a "straight-up bad guy", noting that it would be "a bit dull", and also that the role in that universe already existed in the form of The Red Queen. Instead, Bobin sought to make Time a "Twit", further explaining that "There's no one better at playing the confident idiot trope than Sacha Baron Cohen", and adding that "it was very much with Sacha in mind". Additionally, Toby Jones and John Sessions were originally announced to voice Wilkins and Humpty Dumpty in the film, the roles were eventually given to Matt Vogel and Wally Wingert.

Principal photography began on August 4, 2014, at Shepperton Studios. In August 2014, filming took place in Gloucester Docks, which included the use of at least four historic ships: Kathleen and May, Irene, Excelsior, and the Earl of Pembroke, the last of which was renamed The Wonder for filming. Principal photography ended on October 31, 2014.

The film's score was composed by Danny Elfman. The soundtrack was released on May 27, 2016, by Walt Disney Records. Pink recorded the song "Just Like Fire" for the film, and also covered Jefferson Airplane's "White Rabbit", only used in the film's promotional material.

All music composed by Danny Elfman.

Alice Through the Looking Glass premiered in London on May 10, 2016, and was theatrically released on May 27, 2016, in the United States by Walt Disney Pictures.

Alice Through the Looking Glass was released on Blu-ray, DVD, Blu-ray 3D and digital download on October 18, 2016, by Walt Disney Studios Home Entertainment. It debuted at No. 2 in the Blu-ray Disc sales charts.

All content from Kiddle encyclopedia articles (including the article images and facts) can be freely used under Attribution-ShareAlike license, unless stated otherwise. Cite this article:
Alice Through the Looking Glass (2016 film) Facts for Kids. Kiddle Encyclopedia.