Alocasia macrorrhizos is a species of flowering plant in the arum family (Araceae) that it is native to rainforests of Island Southeast Asia, New Guinea, and Queensland and has long been cultivated in the Philippines, many Pacific islands, and elsewhere in the tropics. Common names include giant taro, ʻape, giant alocasia, biga, and pia. In Australia it is known as the cunjevoi (a term which also refers to a marine animal). 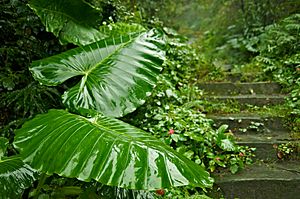 The giant taro was originally domesticated in the Philippines, but are known from wild specimens to early Austronesians in Taiwan. From the Philippines, they spread outwards to the rest of Island Southeast Asia and eastward to Oceania where it became one of the staple crops of Pacific Islanders. They are one of the four main species of aroids (taros) cultivated by Austronesians primarily as a source of starch, the others being Amorphophallus paeoniifolius, Colocasia esculenta, and Cyrtosperma merkusii, each with multiple cultivated varieties. Their leaves and stems are also edible if cooked thoroughly, though this is rarely done for giant taro as it contains higher amounts of raphides which cause itching.

The reconstructed word for giant taro in Proto-Austronesian is *biRaq, which became Proto-Oceanic *piRaq. Modern cognates in Island Southeast Asia and Micronesia include Rukai vi'a or bi'a; Ifugao bila; Ilocano, Cebuano, and Bikol biga; Tiruray bira; Ngaju biha; Malagasy via; Malay and Acehnese birah; Mongondow biga; Palauan bísə; Chamorro piga; Bima wia; Roti and Tetun fia; Asilulu hila; and Kowiai fira. In Oceania, cognates for it include Wuvulu and Aua pia; Motu and 'Are'are hira; Kilivila and Fijian via; and Hawaiian pia. Note that in some cases, the cognates have shifted to mean other types of taro.

Indigenous Australian names included pitchu in the Burnett River (Queensland); cunjevoi (South Queensland); hakkin Rockhampton (Queensland); bargadga or nargan of the Cleveland Bay. The Yugarabul word for the plant, bundal, is also where the name of the suburb Boondall is derived from. 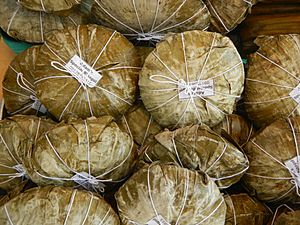 It is edible if cooked for a long time but its sap irritates the skin due to calcium oxalate crystals, or raphides which are needle like. Plants harvested later will have more raphides. Alocasia species are commonly found in marketplaces in Samoa and Tonga and other parts of Polynesia. The varieties recognized in Tahiti are the Ape oa, haparu, maota, and uahea. The Hawaiian saying: ʻAi no i ka ʻape he maneʻo no ka nuku (The eater of ʻape will have an itchy mouth) means "there will be consequences for partaking of something bad".

Anthelme Thozet in 1866 documented the method of preparation: "The young bulbs, of a light rose colour inside, found growing on large old rhizomes, are scraped, divided into two parts, and put under hot ashes for about half an hour. When sufficiently baked, they are then pounded by hard strokes between two stones – a large one, Wallarie, and a small one, Kondola. All the pieces which do not look farinaceous, but watery when broken, are thrown away; the others, by strokes of the Kondola, are united by twos or threes, and put into the fire again ; they are then taken out and pounded together in the form of a cake, which is again returned to the fire and carefully turned occasionally. This operation is repeated eight or ten times, and when the hakkin, which is now of a green-greyish colour, begins to harden, it is fit for use."

All content from Kiddle encyclopedia articles (including the article images and facts) can be freely used under Attribution-ShareAlike license, unless stated otherwise. Cite this article:
Alocasia macrorrhizos Facts for Kids. Kiddle Encyclopedia.