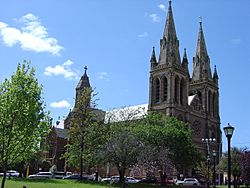 The diocese was founded by letters patent of 25 June 1847 and now forms part of the Province of South Australia, together with the Diocese of Willochra (1915) and the Diocese of The Murray (1969). Since 1970, the Bishop of Adelaide, as the senior bishop of the province (known as the metropolitan), has borne the title of Archbishop.

The retirement of the Most Reverend Jeffrey Driver as Archbishop of Adelaide was announced in 2016, with Archbishop designate, Geoffrey Smith, Assistant Bishop of the Diocese of Brisbane, being elected in December 2016.

All content from Kiddle encyclopedia articles (including the article images and facts) can be freely used under Attribution-ShareAlike license, unless stated otherwise. Cite this article:
Anglican Diocese of Adelaide Facts for Kids. Kiddle Encyclopedia.