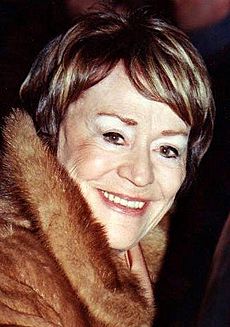 Annie Girardot (25 October 1931 – 28 February 2011) was a French actress. She played independent, hard-working and lonely women in many of her movies. She played Françoise in Love is a Funny Thing. She also played Marie Louise in Hearth Fires.

Girardot was born in Paris. She died there from Alzheimer's disease at age seventy-nine.

All content from Kiddle encyclopedia articles (including the article images and facts) can be freely used under Attribution-ShareAlike license, unless stated otherwise. Cite this article:
Annie Girardot Facts for Kids. Kiddle Encyclopedia.