Anna Margaret "Annie" Glenn, (née Castor; February 17, 1920 – May 19, 2020) was an American activist and philanthropist. She was the widow of former astronaut and Senator John Glenn. She was added into the National Stuttering Association Hall of Fame.

She was known for her works to raise awareness of children and adults with disabilities such as stuttering. She suffered from it during her early years until it went away when she was in her 50s.

Glenn was born in Columbus, Ohio. She studied at Muskingum College. Glenn married John Glenn in 1943. Together, they had two children. Glenn died at a nursing home in St. Paul, Minnesota on May 19, 2020 at the age of 100. The cause of death was COVID-19. 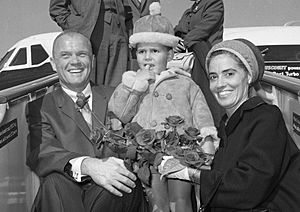 All content from Kiddle encyclopedia articles (including the article images and facts) can be freely used under Attribution-ShareAlike license, unless stated otherwise. Cite this article:
Annie Glenn Facts for Kids. Kiddle Encyclopedia.