The Antillean mango (Anthracothorax dominicus) is a species of hummingbird in the family Trochilidae. It is found on the Caribbean islands of Hispaniola (both the Dominican Republic and Haiti), Puerto Rico, the British Virgin Islands, and Virgin Islands, U.S.. 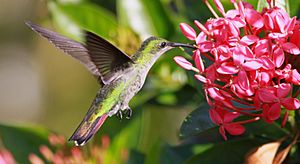 The Antillean Mango is endemic to the West Indies.

The Antillean mango was formally described by the Swedish naturalist Carl Linnaeus in 1766 in the twelfth edition of his Systema Naturae under the binomial name Trochilus dominicus. Linnaeus based his description on the "colibry de S. Domingue" that has been described and illustrated by the French zoologist Mathurin Jacques Brisson in 1760. The type locality is Dominican Republic on the island of Hispaniola (and not the island of Dominica). The Antillean mango is now placed in the genus Anthracothorax that was introduced by the German zoologist Friedrich Boie in 1831.

Two subspecies are recognised, with some sources putting them as different species:

Females and young birds are white-gray breasted. Adult females have a red-terracota colored tail with small white tips at the end.

It is known to be rather quiet, and is the primary pollinator for the flowers H. bihai and H. caribaea.

All content from Kiddle encyclopedia articles (including the article images and facts) can be freely used under Attribution-ShareAlike license, unless stated otherwise. Cite this article:
Antillean mango Facts for Kids. Kiddle Encyclopedia.