Antler is a city in Bottineau County in the U.S. state of North Dakota. The population was 27 at the 2010 census. Antler was founded in 1905.

Antler was established as a rural post office in 1898. It moved to its present location in 1902 to be closer to the Great Northern Railway to the south. The town was formally platted and founded in 1905, and reached a population of 342 by the 1910 Census. The population declined to 101 by the 1980 Census, and just 47 as of the 2000 census.

Views of the old customs house in Antler

Antler's last school closed in 1981. Fearing the end of their town, Rick Jorgensen and Harley "Bud" Kissner thought of ways to bring in newcomers with school-age children to the town with the intent of keeping the school open. Rick thought of the idea to give away land and Bud volunteered some of his 640-acre (2.6 km2) farm to modern homesteaders. The deal was to stay for 5 years and enroll the children in the Antler elementary school. Rick drew up a newspaper ad while a wire service spread the story. The story made national network news aired twice on NBC evening edition with the first story stating the reason was to increase the population and the second story about its role in reopening of the town's schools by the land giveaway. Rick received letters from all over including international letters from Germany and Australia. The plan worked for just a few years, with 6 families receiving plots of 5 or 9 acres (36,000 m2).

In 2015, after failing to turn Leith into an all white community, Craig Cobb moved to Sherwood, near Antler. Craig has expressed a desire to turn the town into a white nationalist community.. In response, the town and mayor destroyed several historic buildings Cobb wanted to purchase.

Antler is located in Antler Township along the United States border with Canada. According to the United States Census Bureau, the city has a total area of 0.17 square miles (0.44 km2), all of it land. Both Antler and the surrounding township are named for nearby Antler Creek, whose branches resemble deer antlers when viewed on a map.

There were 16 households, of which 12.5% had children under the age of 18 living with them, 31.3% were married couples living together, 6.3% had a male householder with no wife present, and 62.5% were non-families. 62.5% of all households were made up of individuals, and 43.8% had someone living alone who was 65 years of age or older. The average household size was 1.69 and the average family size was 2.83.

Antler is the home of what was previously the world's largest historical quilt. 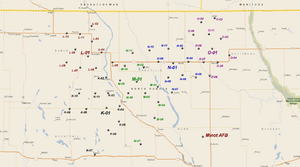 Antler is home to the O-2 Flight, "King Stag", LGM-30 Minuteman Nuclear Missile silo (48-58-01 North, 101-15-36 West), with the distinction of being the closest continental nuclear missile to a Nuclear-missile-free Canada. The site is manned by Missile Operations Flights, Operation Support Flight, and Security Forces Flight crews from the 742d Missile Squadron of the 91st Missile Wing "Rough Riders", based out of Minot AFB, Minot, North Dakota.

All content from Kiddle encyclopedia articles (including the article images and facts) can be freely used under Attribution-ShareAlike license, unless stated otherwise. Cite this article:
Antler, North Dakota Facts for Kids. Kiddle Encyclopedia.