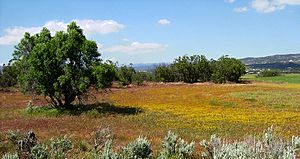 Anza is a census-designated place located in southern Riverside County, California, in the Anza Valley, a semi-arid region at a mean elevation of 3,921 feet (1,195 m) above sea level. It is located 13 miles (21 km) south of Idyllwild, and approximately 35 miles (56 km) southwest of Palm Springs, 143 miles (230 km) southeast of Los Angeles, California and approximately 75 miles (121 km) northeast of San Diego, California, being traversed by State Route 371. The population was 3,014 at the 2010 census.

Locally, Anza and several other mountain communities (including Garner Valley, Idyllwild, Pinyon Pines and Aguanga) are collectively referred to as "the Hill."

The area is characterized as high desert, experiencing somewhat stronger temperature variations than those of the coastal cities, including sudden dips of temperature even on summer evenings, due to the high elevation. The Anza Trail—originally travelled on horseback by Juan Bautista de Anza in 1774 through what was then referred to as the Cahuilla Valley—traverses the city from southeast to northwest.

According to the Köppen Climate Classification system, Anza has a warm-summer Mediterranean climate, abbreviated "Csa" on climate maps.

It is estimated that the Cahuilla aboriginal tribes inhabited an area including what is today the Anza Valley more than two thousand years ago and encountered Europeans only as late as 1774, when a Spanish expedition in search of an overland route from Sonora to Alta California made its way from Tubac, Sonora through the valley to Monterey, Alta California. Explorer Juan Bautista de Anza first passed through the valley on March 16, 1774, and again on December 27, 1775. De Anza originally named the valley "San Carlos"; it was renamed in his honor from Cahuilla Valley to Anza Valley on 16 September 1926.

Up until about 1580 the area was in the proximity of a larger body of inland water known as Lake Cahuilla, but that inland lake larger than the current Salton Sea, which occupies a portion of its former location, evaporated, thus increasing the desert character of the Anza Valley. These climatic and cultural factors can be seen as having exercised a unique influence on the early European settlers of the Anza Valley. During the 19th century, settlement included ranchers, a limited number of miners, and honey producers. The mid-to-late 19th century witnessed moderate population and above average economic prosperity for this isolated community.

From the late 1860s on, Anza was largely settled by families seeking to build ranches under the Homestead Act. Of the homesteads in the area, one, the Cary Ranch on Cary Road (south of Anza, east of the Tripp Flats Ranger Station) still exists and is still owned and occupied by family members of the original settlers. The ranch is now occupied by the Hopkins family. The Hopkins are direct descendents of the Cary family. Although the Cary Ranch used to encompass hundreds of acres of land, most has been sold off, and only a 20-acre (81,000 m2) parcel and several original buildings exist.

Already in the 1970s sales of property parcels and lots in Anza were promoted with particular emphasis on the proximity of this unspoiled countryside to larger coastal cities of southern California. Though perceived by outsiders as friendly and open to newcomers, Anza has been among those unique rural communities determined to systematically avoid the social and environmental problems of over-urbanization and since the 1980s this close-knit community has sought to preserve its unique artistic and creative culture by closely scrutinizing any development plans that could give rise to dysfunctions experienced in other regions of the state.

Due to its history and relative isolation for hundreds of years, Anza is dissimilar to many areas in California settled during the same period. The cultural identity of many long-time Anzans exhibits the marked influence of Cahuillan aboriginal culture on the White population, expressed in terms of art and folklore.

During the 1990s the city enjoyed an increasingly widespread reputation as a growing artists colony featuring newcomers from as far away as Europe. Common free-time activities include trail wandering, local historical activities and festivals as well as motorbiking, rockhounding and horseback riding along the Anza Trail. The Mountain Cahuilla operate a casino from their reservation on the southwestern edge of the city.

Every summer Anza has a parade to celebrate the Fourth of July. This is called Anza Days and it is a festival the whole town celebrates, and people travel miles each year to see it.

Anza also has a local gymkhana horseshowing circuit put on by the Lions Club six months out of the year. This is also a popular event the public enjoys.

According to the 2010 United States Census, Anza had a median household income of $39,637, with 11.5% of the population living below the federal poverty line.

All content from Kiddle encyclopedia articles (including the article images and facts) can be freely used under Attribution-ShareAlike license, unless stated otherwise. Cite this article:
Anza, California Facts for Kids. Kiddle Encyclopedia.