Aquinnah is a town located on the island of Martha's Vineyard in Massachusetts. The population was 311 at the 2010 U.S. census. It is known for its beautiful clay cliffs and quiet natural serenity. Below the clay cliffs is Jungle Beach, named to reflect its reputation as one of the few nude beaches left in the U.S.

Aquinnah has become celebrated as a center of Wampanoag culture and a center of pride and tradition among members of the federally recognized Wampanoag Tribe of Gay Head. They make up about one-third of the town's voters and are one of two federally recognized tribes of Wampanoag people in Massachusetts. This area is one of the earliest sites of whaling. The Wampanoag harvested whales from small boats and the shore, using harpoons, long before the 19th-century industry of whaling became the major maritime industry of Martha's Vineyard, Nantucket, and New Bedford, Massachusetts.

Before the arrival of English colonists, Martha's Vineyard and Aquinnah were inhabited by the Wampanoag, a Native American people, related to the larger Algonquin Nation of Southern New England. Historically they spoke an Algonquian language, part of a large language family that extended down the Atlantic Coast.

The Wampanoag have a separate history; their creation myth tells that their ancestors reached the island after traveling on an ice floe from the far North. They sided with the English settlers in King Philip's War. They performed whaling from small boats. The character Tashtego in Herman Melville's novel Moby-Dick is a Native American harpooner from Aquinnah.

This area was first settled by English colonists in 1669. Later colonists officially divided the town of Aquinnah from Chilmark and incorporated it in 1870 as Gay Head, Massachusetts. Gay Head was a descriptive name referring to the brilliant colors of the cliffs. It has frequently been noted on lists of unusual place names.

In 1997, by popular vote of 79 to 21, the town changed its name to Aquinnah, which is Wampanoag for "land under the hill." Throughout the town's history, a Wampanoag community has been among its residents. The people gained federal recognition as the Wampanoag Tribe of Gay Head in 1987 and controls sovereign tribal lands within the town boundaries.

Seal for the town under the name Gay Head, used until 1998.

The most outstanding feature this small town has is its brightly colored clay cliffs. The clay cliffs are ecologically protected, and it is forbidden to climb the cliffs or touch the clay.

At the foot of the cliffs is Moshup's Beach, named after a giant sachem who used to lead the tribe and of whom many myths are told. The ocean is a rare aqua color here, with wave heights that are above average for the area. The water sometimes has a reddish tinge resulting from reflections from the cliffs above.

Throughout the 1960s and 1970s, the beach was a haven for nude sunbathers who delighted in "clay baths." These are no longer allowed. Although this is not officially designated as a "nude beach," the area just before and just after the first point is designated as "clothing optional."

The protection of the clay cliffs is strictly enforced. A uniformed police officer frequently patrols the beach on ATV, handing out $50 fines for tampering with the clay or engaging in any other illegal activities. Under Massachusetts General Law Ch 272 Sec 59, a person may be arrested for disturbing the clay. The cliffs are also frequently patrolled by a member of the Wampanoag tribe, who explains to visitors about the importance of the cliffs to the tribe. The cliffs feature prominently in Wampanoag spirituality and myths.

According to the United States Census Bureau, the town has a total area of 40.8 square miles (106 km2), of which 5.4 square miles (14 km2) is land and 35.4 square miles (92 km2) (86.85%) is water. Aquinnah ranks 334th in area out of 351 communities in the Commonwealth, and is the smallest town by land area on the Vineyard. Aquinnah is bordered by Vineyard Sound to the north and northwest, Chilmark to the east, and the Atlantic Ocean to the south and west.

Aquinnah is separated from the town of Chilmark by Menemsha Bight, Menemsha Pond, and Squibnocket Pond. The only road into town lies between the ponds. (Squibnocket Beach, which lies between the ocean and Squibnocket Pond, also connects to the town, but is often washed out during storms. No road crosses it.) Squibnocket Point, just east of this beach, is the southernmost point on Martha's Vineyard. Aquinnah has four beaches: Philbin Beach (resident parking only; however, the beach is open to the public) and Moshup Beach to the southwest, Long Beach (adjacent to Squibnocket Beach but privately owned), and Lobsterville Beach along the Sound side of town. The Gay Head Cliffs are in a protected area at the western end of town where the Gay Head Lighthouse stands.

There is no direct transit between Aquinnah and the mainland. Many visitors use commercial planes serving Martha's Vineyard Airport, located in nearby West Tisbury; some have private planes. Others travel by car and ferry; the Woods Hole Ferry is in Vineyard Haven, approximately seventeen miles from the town center. 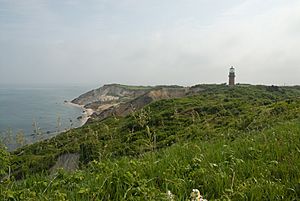 There were 141 households out of which 33.3% had children under the age of 18 living with them, 38.3% were married couples living together, 17.7% had a female householder with no husband present, and 36.9% were non-families. 30.5% of all households were made up of individuals and 7.8% had someone living alone who was 65 years of age or older. The average household size was 2.44 and the average family size was 3.04.

All content from Kiddle encyclopedia articles (including the article images and facts) can be freely used under Attribution-ShareAlike license, unless stated otherwise. Cite this article:
Aquinnah, Massachusetts Facts for Kids. Kiddle Encyclopedia.