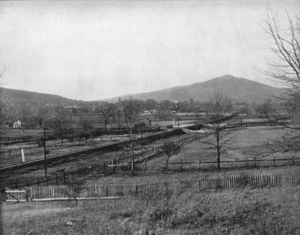 Pilot Knob as photographed in 1876 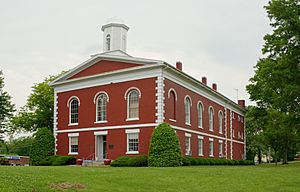 Arcadia Valley in Missouri is located 80 miles south of St. Louis in the St. Francois Mountains of the Ozark Plateau. The valley includes of the towns of Arcadia, Ironton and Pilot Knob, all founded in the 19th century.

Arcadia Valley has been a non-indigenous settlement for over 300 years. It became a permanent settlement as a mining community, primarily mining iron and lead ore.

Arcadia Valley is known for its red brick Iron County courthouse, graceful antebellum homes and turn-of-the-20th-century mercantile buildings. It was a popular 19th-century summer resort. During the Civil War, the valley was the site of a significant battle at Fort Davidson in Pilot Knob.

All content from Kiddle encyclopedia articles (including the article images and facts) can be freely used under Attribution-ShareAlike license, unless stated otherwise. Cite this article:
Arcadia Valley Facts for Kids. Kiddle Encyclopedia.