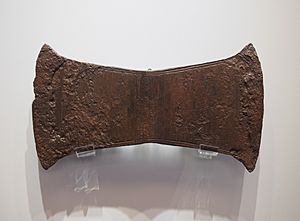 The axe, as it is displayed in the museum.

The Arkalochori Axe is a bronze double axe, probably from the 17th century BC. The axe was found in a cave on Crete, in 1934. Other items were also found together with the axe. Possibly, there was an earthquake which rendered the cave inaccessible, at the end of the period SM I. The axe was probably used for a reliious ritual. The axe is inscribed with fifteen symbols. It has been suggested that these might be Linear A but Professor Glanville Price agrees with Louis Godart that "the characters on the axe are no more than a 'pseudo-inscription' engraved by an illiterate in uncomprehending imitation of authentic Linear A characters on other similar axes." The axe and the Phaistos Disc are conserved in the Iraklion Archaeological Museum.

The cave where the axe was found was used from about 2500 BC onwards. In 1912, 53 bronze swords, and 19 double axes were found there; one of the axes is made of silver. Such axes often appear on items which have been attributed to the Minoan or Mycenean culture. One example is the Hagia Triada sarcophagus, which has been dated to the 14th century BC.

When the cave was searched again in 1934, a bigger double axe, made of bronze was found. This axe is about 30 centimetres wide. It is special because it bears an inscription. The symbols on the axe are aligned in three columns. These characters have been compared to both Linear A and the stamps on the Phaistos disc. As of 2012, the writing is unreadable.

Together with this axe, hundreds of long swords, knives and double axes were found in the cave. Most of these were given as offerings, but some are usable. There are 25 small double axes made of gold and seven made of silver. Among the axes found, there are a golden axe, and one made of sivler; either axe is only about 5 cm wide. Both axes (ref AR Zf 1 and AR Zf 2) bear the same inscription of a word in Linear A:

This has been phonetically transcribed as I-DA-MA-TE. This transcription resembles the name of the goddess Demeter. The four symbols in Linear A also resemble symbols on the bigger bronze axe. The findings indicate that there probably was a temple to a deity linked to military activity in the cave.

Of the fifteen signs, two appear to be unique. The suggestions for comparison with Linear A and Phaistos Disc glyphs are due to Torsten Timm (2004).

Reading right to left, top to bottom, the symbols are as follows.

All content from Kiddle encyclopedia articles (including the article images and facts) can be freely used under Attribution-ShareAlike license, unless stated otherwise. Cite this article:
Arkalochori Axe Facts for Kids. Kiddle Encyclopedia.