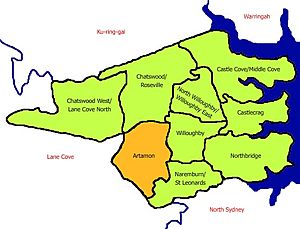 Artarmon is a suburb on the lower North Shore of Sydney, in the state of New South Wales, Australia, 9 kilometres north-west of the Sydney central business district, in the local government area of the City of Willoughby.

In 1794 and 1796, land grants were given to soldiers and emancipists to encourage farming. The most important farm was owned by William Gore (1765–1845) who was the provost-marshal under NSW Governor William Bligh. Gore received a grant of 150 acres (0.61 km2) in 1810 and named it Artarmon after his family estate in Ireland. Gore Hill is named after him.

The Chatswood South Uniting Church, located at the corner of Mowbray Road and the Pacific Highway, was designed by architect and later Mayor of Manly, Thomas Rowe and built in 1871. A sandstone church in the Gothic style, it features a small belfry flanking the eastern front of the building. Immediately to the west is a small cemetery, with graves going back to 1871. The building was extended in 1883 and 1930; it is now listed on the Register of the National Estate. The cemetery is listed by the National Trust and is known as the Pioneer's Memorial Reserve.

Photographer Max Dupain had his studio in Artarmon from 1971 till his death in 1992.

All content from Kiddle encyclopedia articles (including the article images and facts) can be freely used under Attribution-ShareAlike license, unless stated otherwise. Cite this article:
Artarmon, New South Wales Facts for Kids. Kiddle Encyclopedia.