Aspazija was born and raised in a wealthy peasant family near Jelgava in 1865, where she studied and was active in youth organizations. She left gymnasium during the last year of studies, and in 1886 married Wilhelm Max Valter. Later she became interested in literature, mainly by German authors. Her first publication appeared in 1887 in the newspaper Dienas Lapa. In 1891 she divorced her husband and until 1893 worked as a private teacher in Jaunsvirlauka. In 1893 she settled in Riga and started to work as journalist. In 1894 her first plays Vaidelote and Zaudētās tiesības were staged in Riga.

In those years she met Jānis Pliekšāns (better known as Rainis), a newspaper editor, poet, lawyer, and a leader of the New Current (Jaunā strāva) movement. Under his influence Aspazija joined the New Current. The couple married in 1897, when they moved to Panevėžys, Lithuania, after the crackdown of New Current. The same year she published her first collection of poetry. For his activities Rainis was imprisoned and later sentenced to five years in exile in Russia from 1897 to 1903, and Aspazija followed him. Together they translated into Latvian many works of Goethe. Later they returned to Latvia and continued writing, while Rainis also participated in socialist politics.

The 1905 Revolution began with protests in St. Petersburg in January. Within days protests spread to Riga and many were killed on 13 January 1905. Aspazija's play "Vaidelote" (The Vestal) opened in January and was interpreted as a breakup call from the Imperialist Russia. (Rainis also published a collection of revolutionary poems, Vētras Sēja (The Sowing of the Storm).) The czar ordered a crack-down, and many revolutionaries were arrested and killed in 1905-6. Therefore, Rainis and Aspazija fled to Switzerland and lived in exile in Castagnola from 1905 to 1920.

When they returned to independent Latvia after World War I, Aspazija was active in the feminist movement. She also joined the Latvian Social Democratic Workers' Party and was elected to the constitutional assembly. After Rainis died in 1929 Aspazija lived very privately in Riga or in her summer house in Dubulti. She died in 5 November 1943 in Dubulti and was buried in the Rainis cemetery in Riga, next to her husband. 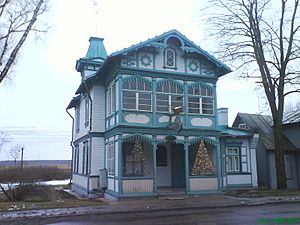 Aspazija's first works are realistic, but most of her work is neo-romantic. Some are a nostalgic look to the past. For example, the play Vaidelote (a female servant to gods in Lithuanian mythology), written in 1894, takes place in the 14th century Grand Duchy of Lithuania. The plays Simple Rights and Unattained Goals provoked many discussions because of their protest against the patriarchal society. The play Silver Veil (Sidraba šķidrauts) is considered to be her best work. In 1923 she wrote a play titled Aspazija.

In the poetry compilation Red Flowers, simple and ordinary things are viewed in a romantic light. At the same time, her poems are full of light, fantasy, and rebellious moods. In Soul's Twilight (1904), pessimistic moods take over.

All content from Kiddle encyclopedia articles (including the article images and facts) can be freely used under Attribution-ShareAlike license, unless stated otherwise. Cite this article:
Aspazija Facts for Kids. Kiddle Encyclopedia.