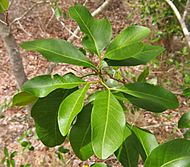 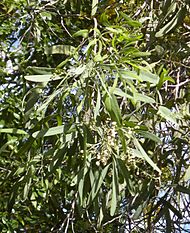 Atalaya is a genus of eighteen species of trees and shrubs of the plant family Sapindaceae. As of 2013[update] fourteen species grow naturally in Australia and in neighbouring New Guinea only one endemic species is known to science. Three species are known growing naturally in southern Africa, including two species endemic to South Africa and one species in South Africa, Swaziland and Mozambique.

One species A. salicifolia, which grows in Australia, has a wider distribution through nearby Timor and westwards through some more of the Lesser Sunda Islands (Indonesia). This species has the widest distribution of all and is the type species—the first to have a formal scientific name, description and represent the genus.

In biodiversity–rich New Guinea as of 2013[update], many areas do not have complete formal scientific botanical survey. In this context, science seems to have only recorded the knowledge of A. papuana growing there naturally as the putative sole endemic species. Regionally widespread A. salicifolia does not seem to have scientific records from New Guinea even though science has recorded it many times in the regions of northern Australia and Timor nearest to southern and western New Guinea.

In mainland Australia's warmer places, twelve species are known by published formal botanical descriptions—trees, shrubs and subshrubs, growing naturally in rainforests, brigalow scrubs, monsoon forests (rainforests in a climate of a summer wet season and cool dry season, with drought–deciduous trees), tropical savannas, coastal scrubs, some arid desert areas and in similar vegetation associations further south than the tropics. Certain species particularly occur in Australia's restricted areas of naturally high nutrient soil types, for instances, soils built from limestone or basalt parent materials. Areas of more fertile soils than average Australian soils, have not surprisingly had their native vegetation associations preferentially destroyed for converting the soils to European–Australian agricultural methods. This has disproportionately brought about the decline of the specialised native plants of these soils.

Two Australian species found in Queensland have herbarium specimen collections and published informal descriptions, but are awaiting formal publication of scientific descriptions and names. Collectively, the fourteen known Australian species range throughout warmer parts of the continent, including parts of the semi-arid and arid zones, in Queensland, the Northern Territory, Western Australia, New South Wales and South Australia, except for Tasmania and Victoria where they have not been recorded. Some Australian species have very reduced, scarce or isolated known ranges and natural habitats, as of 2013[update]. Atalaya collina Yarwun Whitewood trees, have a known range of only two very isolated populations to the west of Gladstone, Queensland, hence this species' populations have a national conservation status listing of "endangered" in the Australian government Environment Protection and Biodiversity Conservation Act 1999 (EPBC).

Ian D. Cowie, Glenn M. Wightman and Benjamin Stuckey formally scientifically named and described the restricted endemic, unique, Atalaya brevialata subshrub species, in their recently published, Dec 2012, scientific paper. Botanists have found this species growing naturally only in a restricted area of the Darwin region of Australia. In their formal scientific description Cowie, Wightman and Stuckey have published the species global conservation status (IUCN) of "endangered" under the following criteria "IUCN B1, 2ab (i, ii, iii, iv, v)". A. brevialata plants have the unusual and unique nature among Atalaya species of a suffruticose growing habit; meaning, in this case, a species which has evolved from an ancestral group of woody–trunked shrubs or trees into having woody growth only underground and above ground only leafy growth. They grow naturally only up to 45 cm (18 in) tall subshrubs, with the leafy above ground growth that dies back each dry season to the underground woody rootstocks.

European science formally named and described the genus Atalaya in 1847, authored by Carl L. Blume, with the Timor type specimen of the species Atalaya salicifolia.

Two species were formally described in 1965 by Pieter W. Leenhouts in preparations for treatment of the family Sapindaceae in Flora Malesiana. In 1981, 1985 and 1991, Sally T. Reynolds scientifically described several new Australian species in two scientific journal articles and in her writing of the Atalaya section of the Flora of Australia (series).

Australian species information was sourced from the authoritative Australian Plant Name Index and Australian Plant Census, the Australian Tropical Rainforest Plants information system, Fruits of the Australian Tropical Rainforest, scientific journal papers, the Flora of New South Wales, and the Flora of Australia. Regarding taxa in New Guinea, Malesia and Africa only few information sources were found, such as the Census of Vascular Plants of Papua New Guinea, Flora Malesiana, and the South African National Biodiversity Institute web sites and the IUCN, respectively, thus for these lands this list may be incomplete.

Species provisionally named, described and accepted according to the authoritative Australian Plant Name Index as of June 2014[update] while awaiting formal publication

All content from Kiddle encyclopedia articles (including the article images and facts) can be freely used under Attribution-ShareAlike license, unless stated otherwise. Cite this article:
Atalaya (plant) Facts for Kids. Kiddle Encyclopedia.