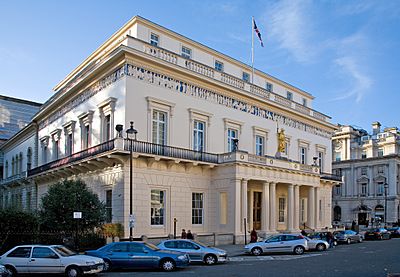 The Athenaeum Club in 2006 viewed from the south-east

The Athenaeum is a private members' club in London, founded in 1824. It is primarily a club for men and women with intellectual interests, and particularly (but not exclusively) for those who have attained some distinction in science, engineering, literature or the arts. Humphry Davy and Michael Faraday were the first chairman and secretary and 51 Nobel Laureates have been members.

The clubhouse is located at 107 Pall Mall at the corner of Waterloo Place. It was designed by Decimus Burton in the Neoclassical style, and built by the company of Decimus's father, James Burton, the pre-eminent London property developer. Decimus was described by architectural scholar Guy Williams as "the designer and prime member of the Athenaeum, one of London's grandest gentlemens' [sic] clubs".

The clubhouse has a Doric portico, above which is a statue of the classical goddess of wisdom, Athena, from whom the club derives its name. The bas-relief frieze is a copy of the frieze of the Parthenon in Athens. The club's facilities include an extensive library, a dining room known as the coffee room, a Morning Room, a drawing room on the first floor, a restored smoking room (smoking is no longer permitted) on the upper floor, and a suite of bedrooms.

The Athenaeum was founded in 1824 at the instigation of John Wilson Croker, then Secretary to the Admiralty, who was largely responsible for the organisation and early development of the Club. In March 1823 he had written to Sir Humphry Davy, who was a personal friend and also at that time the president of the Royal Society, proposing the foundation of a club "for Literary and Scientific men and followers of the Fine Arts". A Committee was formed, the names being proposed by Croker, who wrote that "all depends on having a Committee with a great many good names and a few working hands".

The first meeting was held on 16 February 1824, when fourteen men were present, and a small sub-committee was appointed with full powers to do what was necessary to get the club started. It was resolved that there should be 400 members, of whom 300 were to be appointed by the Committee and the remainder elected by ballot. This first committee also included Sir Thomas Lawrence (who designed the club seal with the head of Athene), Francis Chantrey and Viscount Palmerston. Sir Humphry Davy became the first Chairman of the club and Michael Faraday the first secretary, though he soon found that he could not spare the time required and resigned, though he remained as a member of the club.The total number of members was increased to 1,000 by December 1824.

By May 1824 temporary premises had been rented at 12 Waterloo Place, and Croker and the Committee turned their minds to providing a permanent home for the club. Decimus Burton, then 24 years old, was commissioned to design a permanent clubhouse. A site was chosen on the north side of Pall Mall East but was found to be too small. The next proposed site was on the east side of Trafalgar Square, but then the government decided to demolish Carlton House and develop the site and a portion of it was offered to the Athenaeum. The offer was accepted and a long lease was granted by the Crown.

Aged only 24, Decimus Burton was commissioned to design the Clubhouse at 107 Pall Mall, at the corner of Waterloo Place. Despite his young age, he had already designed many notable buildings in London. The clubhouse is in the Neoclassical style, with a Doric portico with paired columns. The original building had two principal storeys; the third and fourth were added at the end of the 19th century. 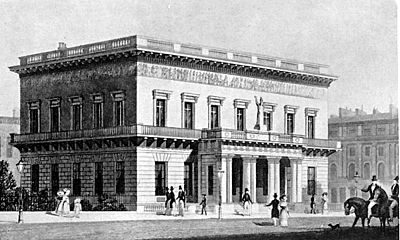 There is a continuous balustrade on the first floor, with an outstanding but costly frieze, designed by Decimus Burton and executed by John Henning, a leading sculptor of the day, which is a copy of the marbles from the Parthenon in Athens ("The Elgin Marbles", now in the British Museum), depicting the Panathenaic procession, copied from the Parthenon. Croker, who was much involved in the building of the clubhouse, was determined that it should have the frieze, despite the cost, and resisted pressure from some members (in those pre-refrigeration days) that an ice-house be part of the scheme; leading some wit to compose the rhyme:

I'm John Wilson Croker, I do as I please. Instead of an Ice-House I give you a... Frieze!

The frieze was executed by John Henning at a cost of £1,300. Building works commenced in 1827 and were completed by 1830. The statue of Pallas Athene by Edward Hodges Baily, which stands above the porch, was installed in the same year (the spear was added later). The total cost was £43,101 14s 8d. This exceeded the estimate by £2,226, attributed to the cost of gas fittings and furniture.

The statue of Apollo above the main staircase is a plaster cast of the Apollo Belvedere. A statue of Demosthenes was first installed there but was speedily removed and replaced by the Apollo, which was presented to the club by Decimus Burton. The statues of Venus and Diana on either side of the hall are casts of antique statues in the Louvre in Paris.

Decimus Burton and his father, James Burton (property developer), were admitted as members.

The new building was complete by early 1830 and the first general meeting was held there on 30 May 1830. In the same year the rules of the club were amended by the addition of a new Rule 2, which allowed the Committee to elect each year not more than 9 persons "of distinguished eminence in science, literature or the arts". This rule has always been a special feature of the club and, with the addition of the words "or for public service", remains in force today. Ordinary members were elected by ballot (until 1935). The Duke of Wellington was a founding member of the club and the stone installed at his request to assist him in mounting his horse can still be seen on the pavement outside the front porch.

After the completion of the building there was a cash deficit of some £20,000 and in 1832 it was decided to bring in 200 supernumerary members, half selected by the committee and half elected by the club. This restored the finances for the time being, but additional expenditure was soon required to improve the ventilation of the clubhouse and because of recurrent troubles with the gas lighting (it was one of the first buildings to be lit by gas) and it was decided in 1838 to increase the permitted number of members to 1,200, which made it necessary to elect a further 40 members. These became known as the "Forty Thieves" and comprised some very distinguished men including Charles Dickens and Charles Darwin.

The number of members was still 1,200 when Humphry Ward published his history of the club in 1926, but has subsequently been increased to 2,000. There was always a long waiting list in the 19th century and the earlier years of the 20th century.

Originally water was obtained from a well and St Martins pump and also (unsatisfactorily) from the Chelsea Water Works. A proper public supply was connected in 1853 and in 1855 a primitive system of mains drainage was made available, although a fully efficient system did not come until 1885. In 1886 the clubhouse was first lit by electricity, supplied by its own two generators in the basement until connected to a public supply in 1896. The interior of the clubhouse was extensively redecorated in the early 1890s to designs by Sir Lawrence Alma-Tadema and Sir Edward Poynter, both members of the club. The morning room decoration (by Poynter) remains largely unchanged. An electric lift was installed in 1900, replacing an earlier hydraulic lift..

The 3rd principal storey was added to the building in 1898, after more than one earlier proposal had been rejected, largely because the members were not prepared to accept an increase in the subscription. This provided space for a large Smoking Room and other rooms including staff bedrooms. The architect was T.E.Collcutt. In 1899 the small smoking room in the basement was combined with the adjoining Billiards Room to make a larger Billiards Room with two tables.

Early in 1914, the Committee passed a resolution allowing members to invite guests (then limited to two male guests) to dinner in the evening and in the Drawing Room afterwards. Previously, only members could eat in the club.

History of the Club after 1914

In 1927/28 a fourth storey was built to provide bedrooms for members and the third floor, which had previously held staff bedrooms, was adapted to provide members' bedrooms. At the same time a large part of the third floor Smoking Room was converted into bedrooms and a washroom.

In 1936 the Club took a lease of 6 Carlton Gardens, once Gladstone's house, as a Ladies Annexe with a dining room and drawing room (where members could invite female guests). This was closed during the Second World War and thereafter (although reopened) it lost its former popularity. The lease expired in 1961 and was not renewed. The Crown refused consent for a new building above the ground, and so a new Ladies Annexe was constructed under the garden, incorporating the former Billiards Room. It was opened in September 1961 with a separate entrance from Waterloo Place, which has an appropriate quotation in Greek from Homer's Odyssey above the door.

In 1972 members were permitted to invite ladies to the Coffee Room for dinner and to the Drawing Room afterwards. Later, they were also allowed as guests to lunch. In 2002 the members voted by a large majority to admit ladies as members on the same terms in all respects as men.

Founders of the Athenaeum Club

51 members of the Club have won the Nobel Prize, including at least one in each category of the prize.

All content from Kiddle encyclopedia articles (including the article images and facts) can be freely used under Attribution-ShareAlike license, unless stated otherwise. Cite this article:
Athenaeum Club, London Facts for Kids. Kiddle Encyclopedia.