Aubrey Brain was born in London in 1893. He started to learn the horn from his father. In 1911 he won a scholarship to the Royal College of Music. He soon became one of Britain’s best horn players. The other great players of the French horn were his father, his elder brother and Adolf Borsdorf. He became principal horn player of the Beecham Opera Company. There he met Marion Beeley, a mezzo-soprano. They married in the summer of 1914 just before the World War I. When war broke out he joined the Welsh Guards and played horn in the band. After the war it was difficult for him at first to find a really good job as horn player . The best horn jobs were already taken by his brother Alfred. Aubrey and Marion had two sons: Leonard (born 1915) and Dennis (born 1921). However, in 1922 Alfred emigrated to the United States. Aubrey soon became first horn of the Royal Philharmonic Society (his father played second horn), and first horn of the Queen’s Hall Orchestra. He was also first horn in the New Symphony and soon he joined the orchestra of Covent Garden as principal horn. In 1923 he joined the London Symphony Orchestra.

In 1923 Borsdorf retired as professor of horn at the Royal Academy of Music, and Aubrey took his place. One of his first pupils was his younger brother Arthur. Although very talented Arthur decided not to take up horn playing professionally and joined the police. Later, Aubrey’s son Dennis was one of his students.

Aubrey had a very successful career, not only as principal horn player in several orchestras, but also as a soloist. He played Mozart’s Second Horn Concerto in 1923 at The Proms. His playing can be heard on several of the very early recordings when the LSO recorded for HMV. Several works were written for him, including the Concerto for French horn, Violin and orchestra by Dame Ethel Smythe. He played it very well, including the chords in the last movement (it is possible to play chords on the horn by humming one note and playing another note of the harmonic series). He played it at the Proms. The conductor Bruno Walter invited him to play it in Berlin. This made Aubrey the first British horn player to play a solo concerto abroad. 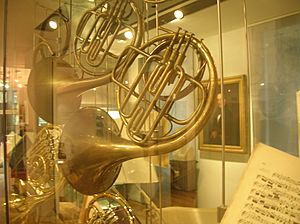 Aubrey Brain's Raoux piston-valve horn on display at the Royal Academy of Music.

Aubrey played a French-type horn (a “Raoux horn”) which had a narrow-bore (the tube was very narrow). The German-type horn had a wider bode and made a slightly different sound. Playing on a Raoux horn there was more risk of a note cracking (not speaking properly). The German-type horn was becoming very popular in England, but Aubrey insisted that all the horn players in the BBC Symphony Orchestra continued to play on Raoux horns. Aubrey was a very skilled musician in chamber music and made a recording with the violinist Adolf Busch and the pianist Rudolf Serkin of the Brahms Horn Trio. It sold many copies and continued to sell for many years until the 78rpm records were replaced by long-playing records.

During the war Aubrey started to have health problems. He had a bad fall on Christmas Day 1940. Towards the end of the war he started to get blurred vision, his speech became slurred and he had strange feelings in his fingers and toes. He retired in 1945 after the first rehearsal for the Prom season. He still performed occasionally, usually together with his son Dennis. He died on 20 September 1955, three days after a bad fall which gave him a heart attack.

Aubrey Brain may be remembered less today because of the exceptional fame of his son Dennis. However, he was a very great horn player who helped to improve the standard of horn playing in Britain, both by his teaching and by the example of his performances. The recordings on which he can be heard were all made before the days of the LP. His older son Leonard became a well-known oboist.

All content from Kiddle encyclopedia articles (including the article images and facts) can be freely used under Attribution-ShareAlike license, unless stated otherwise. Cite this article:
Aubrey Brain Facts for Kids. Kiddle Encyclopedia.