Most of Auburn is located in Union civil township. Portions of Jackson, Keyser and Grant civil townships are also within the city limits.

Auburn's site on Cedar Creek was chosen by Wesley Park and John Badlam Howe at the intersection of two major trails, Goshen-Defiance Road and Coldwater Road, and next to the land of John Houlton. The name for the community likely came from "The Deserted Village" by Oliver Goldsmith, that begins "Sweet Auburn! Loveliest village of the plain." The plat of the Village of Auburn is dated April 21, 1836, but it was held by Howe and not recorded until March 12, 1879. John Drury purchased the first lot (Lot 73) for $25.00 on September 5, 1837. The first store was built at Park's corners by Thomas Freeman, applying for a license on March 5, 1838, and bringing supplies by horseback from Fort Wayne. Daniel Altenburg, Levi Walsworth, the Sherlock family, Samuel Sprott, David Weave, David Shoemaker, Henry Curtis, Lyman Childsey, James Cosper, and David Cosper were early residents.

A post office was established in 1839. In 1841, malaria ran through the town, and in 1843 a terrible storm wreaked havoc on cabins and crops. The Church of God was built by the Presbyterians in 1846. The Village of Auburn was incorporated in 1849, divided into wards, and governed under a town board and constable. By the end of the American Civil War, the town included over 700 inhabitants. The storm of September 29, 1872, destroyed Odd Fellow's Hall and damaged the Methodist Episcopal church. A few months later (April 6, 1873), the new brick block of Seventh Street (Snyder's Building) collapsed, also destroying the Ensley Building. Auburn water and lights was constructed in 1898. The change in status to the City of Auburn on March 26, 1900 followed a referendum. Notable citizen Charles Eckhart erected a public library and a YMCA building. The Auburn Automobile Company founded in 1900 produced its first automobile in 1903. William Wrigley, Jr. and Errett Lobban Cord controlled interests in the company that eventually acquired Duesenberg, Lexington, and Lycoming. The company failed in August 1937. The Auburn Rubber Company was started in 1913 as the Double Fabric Tire Company, making tires for Auburn Automobile Company. In the 1920s as Auburn Rubber, it became a large manufacturer of rubber toys, leaving Auburn in 1959. 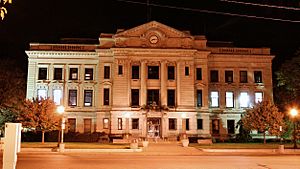 The Dekalb County Free Fall Fair is held in down town Auburn. It starts at the end of September and has over 850,000 guests a year.

Events and sites of interest 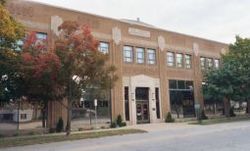 Auburn Cord Duesenberg Automobile Museum, Auburn, Indiana, a National Historic Landmark that was once the headquarters and showroom of the Auburn Automobile Company.

Auburn is the location of the Auburn Cord Duesenberg Festival, held each Labor Day weekend, and of the Auburn Cord Duesenberg Automobile Museum and the National Automotive and Truck Museum of the United States. Both are National Historic Landmarks. The Auburn Cord Duesenberg Festival, with the annual Labor Day auction, is said to host the world's largest automotive auction. These automotive-related events are the legacy of the Auburn Automobile Company, which closed in the late 1930s. The company had its headquarters and a factory in Auburn. Other museums located near Auburn include the Hoosier Air Museum, the Kruse Automotive and Carriage Museum, which includes the International Monster Truck Hall of Fame, and the World War II Victory Museum. Auburn also hosts the annual DeKalb County Free Fall Fair, a six-day event usually held in the last week of September.

Auburn was also home to early automobile company DeSoto in 1913. This company has no connection with the DeSoto that was manufactured by Chrysler.

The official city logo, pictured at right, is based on the logo of the former Auburn Automobile Company. The company went out of business in the 1930s. The municipality began using the logo in the 1980s. The city's official nickname is '"Home of the Classics,"' a reference to the "classic" automobiles once manufactured there.

There is also a K-12 private school:

The town has a free lending library, the Eckhart Public Library.

All content from Kiddle encyclopedia articles (including the article images and facts) can be freely used under Attribution-ShareAlike license, unless stated otherwise. Cite this article:
Auburn, Indiana Facts for Kids. Kiddle Encyclopedia.