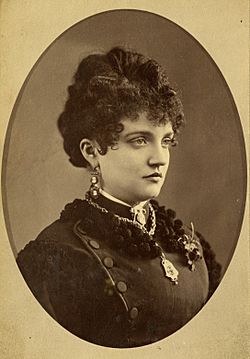 Elizabeth McCourt Tabor (September 1854 – March 7, 1935), better known as Baby Doe, was the second wife of Colorado pioneer businessman Horace Tabor. Her rags-to-riches and back to rags again story made her a well-known figure in her own day, and inspired an opera and a Hollywood movie based on her life.

Born in Oshkosh, Wisconsin, she moved to Colorado in the mid-1870s with her first husband, Harvey Doe, whom she divorced for drinking, gambling and being unable to provide a living.

She then moved to Leadville, Colorado, where she met Horace Tabor, a wealthy silver magnate almost twice her age. In 1883, he divorced his first wife, Augusta Tabor, to whom he had been married for 25 years, and married Baby Doe in Washington, D.C. during his brief stint as a US senator, after which they took up residence in Denver. His divorce and remarriage to the young and beautiful Baby Doe caused a scandal in 1880s Colorado. Although Tabor was one of the wealthiest men in Colorado, supporting his wife in a lavish style, he lost his fortune when the repeal of the Sherman Silver Purchase Act caused the Panic of 1893 with widespread bankruptcies in silver-producing regions such as Colorado. He died destitute, and she returned to Leadville with her two daughters, living out the rest of her life there.

At one time the "best dressed woman in the West", for the final three decades of her life, she lived in a shack on the site of the Matchless Mine, enduring great poverty, solitude, and repentance. After a snowstorm in March 1935, she was found frozen in her cabin, aged about 81 years. During her lifetime she became the subject of malicious gossip and scandal, defied Victorian gender values, and gained a "reputation of one of the most beautiful, flamboyant, and alluring women in the mining West". Her story inspired the opera The Ballad of Baby Doe.

All content from Kiddle encyclopedia articles (including the article images and facts) can be freely used under Attribution-ShareAlike license, unless stated otherwise. Cite this article:
Baby Doe Tabor Facts for Kids. Kiddle Encyclopedia.