Baker's Keyboard Lounge located on 20510 Livernois Street in Detroit, Michigan, claims to be the world's oldest operating jazz club, operating since May 1934, although the Green Mill in Chicago has been open since 1907. 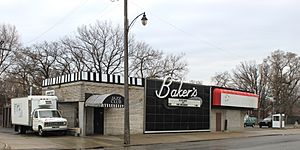 In 1933, Chris and Fannie Baker opened Baker's as a lunchtime sandwich restaurant. In 1934, their son Clarence Baker began booking jazz pianists, but Baker's was still known at that time principally as a restaurant. In 1939 Clarence, took over ownership after Chris had suffered from a stroke. That same year, Clarence began booking pianists from outside the Detroit area, although the club featured local pianist Pat Flowers from 1940 until 1954. In 1952, the club was expanded and remodeled to the Art Deco look that it retains today. By 1954, the business had rapidly expanded, and by the following year, Baker's began featuring major jazz acts, notably Art Tatum who played the last two years of his life, Dave Brubeck in 1957 and Gerry Mulligan in 1958. During the 1950s "modern" jazz was less common at Baker's than it was in the 1960s, when the emphasis of the club's music changed to Hard Bop. During the 1960s Clarence leased the club out, but resumed personal control in the 1970s.

Baker's is noted for its long history of presenting local and major jazz acts, its excellent acoustics, its intimacy - seating only 99, its Art Deco furnishings, including a distinctive, piano-shaped bar painted with a keyboard motif, Art Deco style paintings of European city landscapes by Harry Julian Carew, tilted mirrors that allow patrons to view the pianist's hands, and its Steinway piano which was selected and purchased in New York by Tatum for Clarence in the 1950s. The club still displays its original liquor pricelist from 1934, showing the price of beer at 26 cents.

In 1986, Baker's was designated as an Historic Site by the Michigan State Historic Preservation Office. The historic significance of the site is stated as follows:

Baker's Keyboard Lounge has significance as Michigan's jazz mecca and Detroit's oldest jazz club in continuous operation. Founded in May 1933 by Chris Baker as a restaurant and piano bar, the present jazz orientation of the club has been firmly in place since 1939. Baker's Keyboard Lounge has hosted the greatest names in blues and jazz since that date. Some of the musicians who have played the club include: Ella Fitzgerald, Miles Davis, Oscar Peterson, George Shearing, Sarah Vaughn, Joe Williams, Maynard Ferguson, Cab Calloway, Woody Herman, Modern Jazz Quartet, and Nat "King" Cole; to name but a few. In 1984, Baker's Keyboard Lounge celebrated fifty-years of the sound of jazz in Detroit and Michigan.

The popularity of the club declined in the 1970s and 1980s, and was nearly closed on several occasions. In 1996, after owning the club for 57 years, Clarence Baker sold the club to John Colbert and Juanita Jackson. The new owners were challenged by declining interests in live jazz performances, due to the aging of the fanbase of jazz purists, a shift to mainstream jazz from the historic Hard Bop emphasis of the club, and the popularity of hip hop. The new ownership attempted to compensate with fundraisers, a reduction in bookings of nationally-known acts and emphasis on local artists, and diversifying the lineup to include R&B and comedy acts. The club experienced a resurgence in popularity, but the downturn in the economy led Colbert to declare bankruptcy in 2010, leading to widespread speculation that the club would finally close. In 2011, the club was purchased at a bankruptcy sale, by Hugh W. Smith III, who had been manager of the club for the previous two years and Eric Whitaker Sr. Smith and Whitaker vowed to keep Baker's open as a jazz club.

In 2016, The Detroit City Council approved an ordinance to establish the Baker's Keyboard Lounge Historic District, a designation that prevents whoever owns the building from demolishing it or altering its exterior without permission from the Detroit Historic District Commission.

With the economic and cultural resurgence of Detroit, Baker's is again receiving notable media coverage.

Terry Pollard was discovered by Terry Gibbs while playing at Baker's in 1952-53, subsequently joining the Terry Gibbs Quartet for a national tour.

Charles Mingus's September 1969 performances at Baker's were a part of his comeback in that year.

Klugh credits his frequenting Baker's as a teenager in the early 1970s, chaperoned by his mother, as a significant factor in the development of his music career, enabling him to meet prominent artists who were playing there, such as George Benson, Chick Corea and Lateef, each of whom he then toured or recorded with, and Bill Evans who was a central influence on Klugh's songwriting.

Jazz singer Eddie Jefferson was shot and killed at Baker's Keyboard Lounge on May 8, 1979. He had left the club with alto sax man Richie Cole around 1:35 a.m. and was shot while walking out of the building.

Woody Shaw recorded his posthumously-released 1997 album Bemsha Swing for Blue Note at Baker's in 1986, along with Geri Allen, Robert Hurst and Roy Brooks.

In 1987, Anita Baker filmed the music video for the track "Same Ole Love" from her album Rapture at Baker's.

All content from Kiddle encyclopedia articles (including the article images and facts) can be freely used under Attribution-ShareAlike license, unless stated otherwise. Cite this article:
Baker's Keyboard Lounge Facts for Kids. Kiddle Encyclopedia.