Balliet Run (also known as Balliet's Run) is a tributary of Big Wapwallopen Creek in Luzerne County, Pennsylvania, in the United States. It is approximately 7.3 miles (11.7 km) long and flows through Dorrance Township, Hollenback Township, and Butler Township. The watershed of the stream has an area of 7.23 square miles (18.7 km2). The stream itself is fairly small and has two unnamed tributaries. It is considered to be Class A Wild Trout Waters and is inhabited by brook trout and brown trout. Wisconsinan Till, fill, and bedrock consisting of sandstone, conglomerate, and shale occur in the vicinity of the stream. 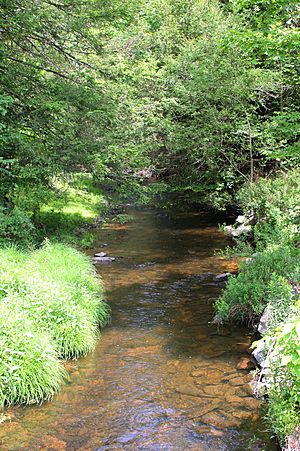 Balliet Run near its mouth

The concentration of alkalinity in the waters of Balliet Run is 11 milligrams per liter.

A facility known as the YRC Wilkes Barre Terminal has a permit to discharge sewage into Balliet Run.

Balliet Run is a small stream and is said to resemble a mountain stream fed by springs. An article in Times Leader stated that "one gets the feeling that there is something special about the cool, clear water contained within its banks". The stream is on the northern side of Nescopeck Mountain.

Most of the upper reaches of Balliet Run are on a glacial or resedimented till known as Wisconsinan Till. However, fill is present in some small areas of the watershed, as is bedrock consisting of sandstone, conglomerate, and shale.

The watershed of Balliet Run has an area of 7.23 square miles (18.7 km2). The mouth of the stream is in the United States Geological Survey quadrangle of Sybertsville. However, the source is in the quadrangle of Freeland.

Balliet Run is on private land that is closed to access throughout its entire length. There are 10.73 miles (17.27 km) of streams in its watershed. There is a patch of wetland at the stream's headwaters.

In the 1980s, a skeet shooting club known as Ashley Skeet Club from the borough of Ashley owned a tract of land on Blue Ridge Trail at Balliet Run.

Balliet Run was stocked with fish in 1957. However, it was designated as Class A Wild Trout Waters in 2007. In 2013, a 100-acre tract of land on the stream underwent conservation for the area's bat and trout populations.

In the court case Pennsy Supple, Inc. v. Zoning Hearing Board of Dorrance County, it was alleged that sediment from a nearby quarry was adversely affecting Balliet Run. However, Patrick Bartorillo, president of the Small Mountain Quarry stated that "There will be no impact on wetlands, no impact on Balliet Run and we would enclose all the crushing equipment."

Balliet Run is inhabited by brown trout. The biomass of that species of trout in the stream is 59.73 kilograms per hectare, considerably higher than the minimum of 30 kilograms per hectare that is required for a stream to be designated as Class A Wild Trout Waters. Native brook trout also inhabit the stream.

All content from Kiddle encyclopedia articles (including the article images and facts) can be freely used under Attribution-ShareAlike license, unless stated otherwise. Cite this article:
Balliet Run Facts for Kids. Kiddle Encyclopedia.