Balsam is an unincorporated community located in the Scott Creek township of Jackson County, in the Blue Ridge Mountains of Western North Carolina, USA. As of the 2000 census, the town had a total population of 49. There is one United States Post Office in the town. The Zip Code is 28707.

Balsam is located near Balsam Gap, a mountain pass between the Great Balsam Mountains and the Plott Balsams, two of the highest ranges in the Appalachian Mountains. The town and ranges are named after the nicknames of the red spruce and Fraser fir ("he-balsam" and "she-balsam," respectively), which are the dominant tree types at the highest elevations in the Southern Appalachian mountains.

According to the United States Census Bureau, the town has a total area of 3.2 square miles (8.3 km2), all of it land.

There were 14 households, out of which 50.0% had children under the age of 18 living with them, 71.4% were married couples living together, 0.0% had a female householder with no husband present, and 21.4% were non-families. 0.0% of all households were made up of individuals, and 21.4% had someone living alone who was 65 years of age or older. The average household size was 3.50 and the average family size was 3.73. 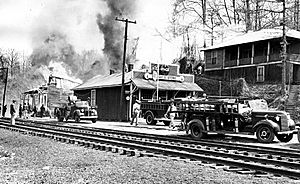 Knights Store in Balsam, as it appeared when the old store and post office building behind it burned. The building still stands, though in an extremely deteriorated state, as it was abandoned in 1979. 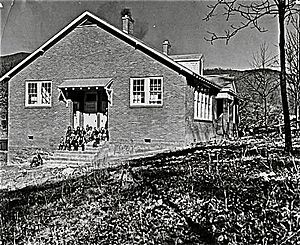 Balsam was a tourist stop on the Murphy Branch of the Western North Carolina Railroad, later the Southern Railway. In the early 20th century, tourists would travel from Asheville to the train depot at Balsam and stay at just up the hill at the Balsam Mountain Inn. Today, the depot no longer stands at the original site but was moved up the ridge, in the 1960s, to a private location and the original siding sees little use by the Norfolk Southern Railway. Balsam Mountain Inn, renovated in 1990 and refurbished in 2004 is still in operation, serves as a nostalgic reminder of a by-gone era with a great restaurant and wine list. Another notable building, Knight's Store, stands near where the depot once stood at the bottom of the hill the Balsam Mountain Inn sits on. The building was built in the early 1900s and closed in 1979. It is a popular photography subject and many photos can be found of it on Flickr.

The community of Willets is located near Balsam and is sometimes confused as being a part of Balsam, though it is not. Balsam once had several stores, churches, houses, the Balsam Mountain Inn, its own Depot and School, but most remaining buildings are faded memories of what once was. The construction of 4-Lane US 74/23 in the 1970s cut into the community, caused the demolition of several buildings, and further opened Balsam to the outside world. Today it is largely a bedroom community for Sylva and Waynesville. The stores are all long closed though a few of the old store buildings still stand and the schools were consolidated into Scotts Creek Elementary in 1951. The mills are long closed and demolished. Balsam still has a post office and its inn. Balsam Depot was moved up a hill in the 1960s and became a house. Balsam is a shadow of the thriving small tourist town it was from the 1890s up until the 1930s.

Balsam is located near several popular recreational areas, some of which are accessible from the nearby Blue Ridge Parkway.

All content from Kiddle encyclopedia articles (including the article images and facts) can be freely used under Attribution-ShareAlike license, unless stated otherwise. Cite this article:
Balsam, North Carolina Facts for Kids. Kiddle Encyclopedia.