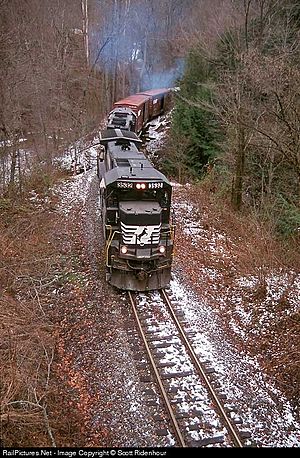 The historically important Murphy Branch is the westernmost part of what was the Western North Carolina Railroad, later the Richmond and Danville, Southern Railway, the Norfolk Southern Railway (NS) and today the Blue Ridge Southern Railroad. The branch runs between Asheville, North Carolina in the east and Murphy in the west. It roughly follows I-40 from Asheville to Canton and US Route 74, also known as the Great Smoky Mountains Expressway, from Canton to Murphy.

Grades on the Murphy Branch exceed 4.0% in two places.

In the 1980s, Norfolk Southern decided to close the Murphy Branch west of Sylva because of declining freight traffic. The NCDOT purchased the branch west of Dillsboro in 1988, the first purchase under NCDOT's program to preserve rail corridors, and granted trackage rights between Dillsboro and Andrews to the Great Smoky Mountains Railroad (GSMR), a tourist excursion railroad that also provides freight service. In 1996, the NCDOT sold the Dillsboro-Andrews portion of the Murphy Branch to the GSMR.

In April, 2014 it was announced that Norfolk Southern would be selling the Asheville-Dillsboro leg of the Murphy Branch to Watco, a short line railroad headquartered in Pittsburg, Kansas. A new North Carolina Limited Liability Company was established and named the Blue Ridge Southern Railroad. The deal closed and operations began on 26 July 2014.

The GSMR continues to own the Dillsboro to Andrews leg and operates all but the westernmost portion between Hewitt and Andrews. The NCDOT continues to own the tracks between Andrews and Murphy which has been out of service continuously since 1985. CSX abandoned and removed its connecting line from Murphy southwestward into Georgia, formerly a line of the Louisville and Nashville, in 1986.

Towns, cities and communities along the route 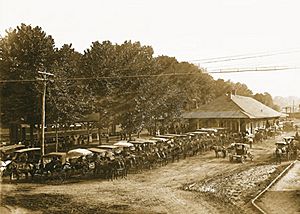 The Waynesville Train Depot sometime in the 1890s

The Murphy Branch still plays a vital role in the industrial economy of western North Carolina. The rail line serves two paper mills: Evergreen Packaging in Canton and Jackson Paper Manufacturing Company in Sylva. Chemicals used in the making of epsom salt are delivered to Giles Chemical in Waynesville and there are a number of small concrete mixing facilities that receive sand. Woodchips are loaded at T&S Hardwoods in Addie, about 4 miles east Sylva. Liquefied petroleum gas is delivered to a transfer facility a few miles outside of Sylva in the community of Beta.

All content from Kiddle encyclopedia articles (including the article images and facts) can be freely used under Attribution-ShareAlike license, unless stated otherwise. Cite this article:
Murphy Branch Facts for Kids. Kiddle Encyclopedia.