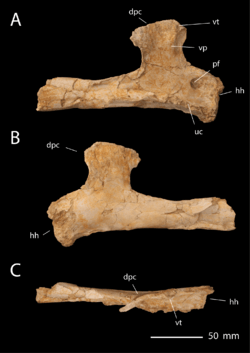 Barbaridactylus was probably a slender pterosaur. Its arm and wing bones were averagely sized for a pterosaur of its time.

Barbaridactylus was described based from two specimens.

The first specimen consisted of a partial jaw, a single neck vertebra, part of the arm and wing bones and the left thigh bone.

The second specimen (catalogued as USM93000) consists of a well preserved skeleton.

All content from Kiddle encyclopedia articles (including the article images and facts) can be freely used under Attribution-ShareAlike license, unless stated otherwise. Cite this article:
Barbaridactylus Facts for Kids. Kiddle Encyclopedia.