Barnesville is a city in Lamar County, Georgia, United States. The city is a part of the Atlanta Metropolitan Area. As of the 2010 census, the city had a population of 6,755. The city is the county seat of Lamar County.

Barnesville was once dubbed the "Buggy Capital of the South" as the town produced about 9,000 buggies a year around the turn of the 20th century. Each year in the third week of September the town hosts an annual Buggy Days celebration.

Barnesville was founded in 1826 and named for local tavern owner Gideon Barnes. In 1920, Barnesville was designated seat of the newly formed Lamar County.

Barnesville served as a major hospital site for wounded southern troops during the Civil War. Local families took wounded soldiers into their homes and treated them, with highly successful recovery rates. Major General William B. Bate, CSA of Hardees Corps., wounded in Atlanta at Utoy Creek on August 10, 1864, was treated here. After the war, General Bate was elected Governor of Tennessee and served in the United States Senate until his death in 1912. He commented on his successful recovery as a result of the kindness of the local populace in Barnesville.

In the early morning hours of April 28, 2011, at 12:38 A.M., a tornado rated EF3 on the Enhanced Fujita Scale with 140 mph winds touched down in Pike County four miles south of Meansville. The tornado went on to destroy several homes in Barnesville. Two deaths occurred in Barnesville along Grove Street. The tornado also destroyed a Chevron gas station and a church in Barnesville. Three tractor trailers also blown off of Interstate 75 at approximately 1:02 A.M. This tornado was part of the April 25–28, 2011 tornado outbreak.

There were 2,079 households out of which 31.5% had children under the age of 18 living with them, 37.1% were married couples living together, 25.3% had a female householder with no husband present, and 33.5% were non-families. 29.0% of all households were made up of individuals and 12.0% had someone living alone who was 65 years of age or older. The average household size was 2.47 and the average family size was 3.04.

Barnesville was the location of an auto accident that killed 16-year-old Jeanette Clark, who was on a date with J.L. Hancock, also 16, on December 22, 1962. This accident was (falsely) rumored to be the inspiration of the hit song "Last Kiss" written by Wayne Cochran, Joe Carpenter, Randall Hoyal & Bobby McGlon (1961). Hancock was driving a 1954 Chevrolet on the Saturday before Christmas with some friends. In heavy traffic on U.S. Highway 341 their car hit a tractor-trailer carrying a load of logs. Clark, Hancock and Wayne Cooper were killed. Cochran lived on Georgia's Route 19/41 when he wrote "Last Kiss", only 15 miles away from the crash site. He rerecorded "Last Kiss" for release on King Records in 1963 and dedicated it to Clark, a fact which probably explains the association of the song with the tragic crash. 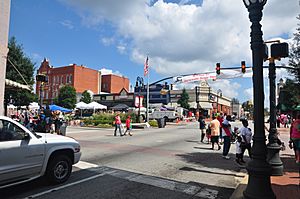 Nearby events include the following,

All content from Kiddle encyclopedia articles (including the article images and facts) can be freely used under Attribution-ShareAlike license, unless stated otherwise. Cite this article:
Barnesville, Georgia Facts for Kids. Kiddle Encyclopedia.