The Battle of Rich Mountain took place on July 11, 1861, in Randolph County, Virginia (now West Virginia) as part of the Operations in Western Virginia Campaign during the American Civil War. 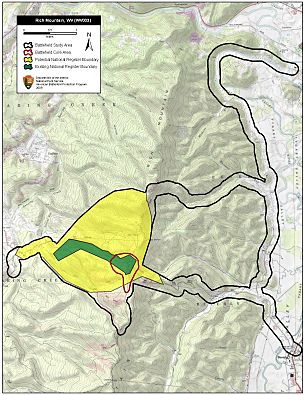 A sharp two-hour fight ensued in which the Confederates were split in two. Half escaped to Beverly and on over the Shawnee Trail, but Pegram and the others (including the "Sydney Boys", a regiment formed from the students of Hampden-Sydney College) surrendered on July 13.

Hearing of Pegram's defeat, Garnett abandoned Laurel Hill. The Federals pursued, and, during fighting at Corrick's Ford on July 13, Garnett was killed; he was the first general officer to be killed in the war. On July 22, McClellan was ordered to Washington, and Rosecrans assumed command of Union forces in western Virginia. The Union victory at Rich Mountain was instrumental in propelling McClellan to command of the Army of the Potomac.

The battlefield and Camp Garnett today are owned and protected by the Rich Mountain Battlefield Foundation. The Civil War Trust (a division of the American Battlefield Trust) and its partners, including the foundation, have acquired and preserved 57 acres (0.23 km2) of the battlefield.

All content from Kiddle encyclopedia articles (including the article images and facts) can be freely used under Attribution-ShareAlike license, unless stated otherwise. Cite this article:
Battle of Rich Mountain Facts for Kids. Kiddle Encyclopedia.