Beachmere is a coastal rural town and locality in the Moreton Bay Region, Queensland, Australia. In the 2016 census, Beachmere had a population of 4,112 people.

It is located north of Brisbane, the state capital of Queensland.

The origin of the suburb name is from an early residence owned by Thomas Edwin Bonney by the name of Beachmere meaning a beach upon marshy ground. Bonney is believed to be the first settler in the area, having arrived in 1870.

The Moreton Bay Birali Steiner School opened on 15 April 2013, and is part of Steiner Education Australia. 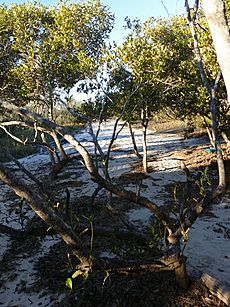 The sandy beach among the mangroves

There is no secondary school in Beachmere with the nearest being in neighbouring Caboolture and Morayfield or in Bongaree on Bribie Island.

The Moreton Bay Regional Council operates a mobile library service which visits Clayton Park on the corner of Biggs Avenue and Main Street.

All content from Kiddle encyclopedia articles (including the article images and facts) can be freely used under Attribution-ShareAlike license, unless stated otherwise. Cite this article:
Beachmere, Queensland Facts for Kids. Kiddle Encyclopedia.