Paria Point is situated 0.5 mi (0.80 km) immediately north, and Nagunt Mesa is 0.57 mi (0.92 km) immediately south, with 2,000-foot-deep finger canyons between each. Other neighbors include Timber Top Mountain 1.85 mi (2.98 km)to the south-southwest, and Tucupit Point to the north. Beatty Point is composed of Jurassic Navajo sandstone overlaying tilted Kayenta Formation. Precipitation runoff drains into Timber Creek and Taylor Creek, which are both part of the Virgin River drainage basin. This geographical feature's name honors the Beatty family of Toquerville, Utah. Walter Lamb Beatty served as a guide for 20 years in Zion National Park.

Spring and fall are the most favorable seasons to visit Beatty Point. According to the Köppen climate classification system, it is located in a Cold semi-arid climate zone, which is defined by the coldest month having an average mean temperature below 32 °F (0 °C), and at least 50% of the total annual precipitation being received during the spring and summer. This desert climate receives less than 10 inches (250 millimeters) of annual rainfall, and snowfall is generally light during the winter. 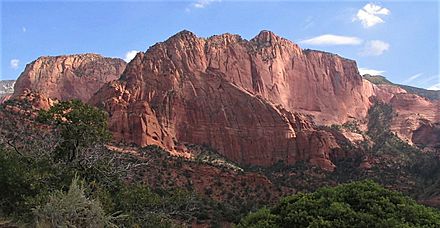 All content from Kiddle encyclopedia articles (including the article images and facts) can be freely used under Attribution-ShareAlike license, unless stated otherwise. Cite this article:
Beatty Point (Utah) Facts for Kids. Kiddle Encyclopedia.