Beer in Australia facts for kids 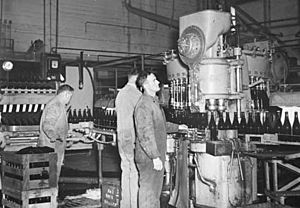 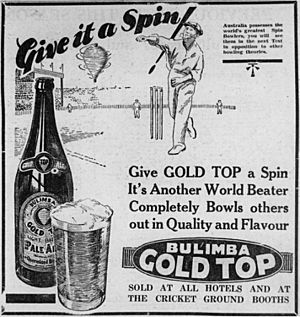 Beer arrived in Australia at the beginning of British colonisation. In 2004 Australia was ranked fourth internationally in per capita beer consumption, at around 110 litres per year; although, the nation ranked considerably lower in a World Health Organization report of alcohol consumption per capita of 12.2 litres. Lager is by far the most popular type of beer consumed in Australia.

The oldest brewery still in operation is the Cascade Brewery, established in Tasmania in 1824. The largest Australian-owned brewery is the family-owned Coopers Brewery, as the other two major breweries Carlton & United Breweries and Lion Nathan are owned by Japan’s Asahi and Kirin Brewing Company respectively.

Non-alcohol beer variations continue to increase their market share in Australia. Reports put their growth up 60%[compared to?] for the second half of 2019.

Within an alcoholic beverage market worth some $16.3 billion, beer comprises about 48% compared to wine at 29% and spirits at 21%. Within the beer sector, premium beers have a 7.8% share of the market; full strength beer has 70.6%; mid-strength holds 12%; and light beer has 9.6%. 85% of beer is produced by national brewers, the remainder by regional or microbreweries. Microbreweries manufacturing less than 30,000 litres receive a 60% excise rebate.

The history of Australian beer starts very early in Australia's colonial history. Captain James Cook brought beer with him on his ship Endeavour as a means of preserving drinking water. On 1 August 1768, as Cook was fitting out the Endeavour for its voyage, Nathaniel Hulme wrote to Joseph Banks with a recommendation:

"a quantity of Molasses and Turpentine, in order to brew Beer with, for your daily drink, when your Water becomes bad. … [B]rewing Beer at sea will be peculiarly useful in case you should have stinking water on board; for I find by Experience that the smell of stinking water will be entirely destroyed by the process of fermentation."

Beer was still being consumed on-board two years later in 1770, when Cook was the first European to discover the east coast of Australia.

The drink of choice for the first settlers and convicts was rum, as represented in a supposed traditional convict song:

Cut yer name across me backbone
Stretch me skin across yer drum
Iron me up on Pinchgut Island
From now to Kingdom Come.
I'll eat yer Norfolk Dumpling
Like a juicy Spanish plum,
Even dance the Newgate Hornpipe
If ye'll only gimme Rum!

The first official brewer in Australia was John Boston who brewed a beverage from Indian corn bittered with cape gooseberry leaves. It is likely though that beer was brewed unofficially much earlier. The first pub, the Mason Arms was opened in 1796 in Parramatta by James Larra, a freed convict. 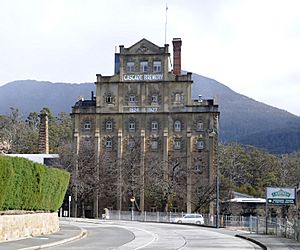 The Cascade Brewery is the oldest brewery in Australia, having been founded in 1824

Rum was so popular—and official currency was in such short supply—that it became a semi-official currency for a period of time (see Rum corps), and even played a role in a short-lived military coup, the Rum rebellion in 1808. Drunkenness was a significant problem in the early colony:

"Drunkenness was a prevailing vice. Even children were to be seen in the streets intoxicated. On Sundays, men and women might be observed standing round the public-house doors, waiting for the expiration of the hours of public worship in order to continue their carousing. As for the condition of the prison population, that, indeed, is indescribable. Notwithstanding the severe punishment for sly grog selling, it was carried on to a large extent. Men and women were found intoxicated together, and a bottle of brandy was considered to be cheaply bought for 20 lashes... All that the vilest and most bestial of human creatures could invent and practise, was in this unhappy country invented and practised without restraint and without shame"

As a means of reducing drunkenness, beer was promoted as a safer and healthier alternative to rum:

"The introduction of beer into general use among the inhabitants would certainly lessen the consumption of spirituous liquors. I have therefore in conformity with your suggestion taken measures for furnishing the colony with a supply of ten tons of Porter, six bags of hops, and two complete sets of brewing materials."

Although modern Australian beer is predominantly lager, early Australian beers were exclusively top-fermented and quick-maturing ales. Lager was not brewed in Australia until 1885. Early beers were also brewed without the benefit of hops, as no-one had successfully cultivated hops in Australia and importation was difficult. James Squire was the first to successfully cultivate hops in 1804, and he also opened a pub and brewed beer. The Government Gazette from 1806 mentions that he was awarded a cow herd from the government for his efforts.

In September 1804, a government-owned brewery opened in Parramatta, followed by a rival privately owned brewery three months later. The government brewery was sold two years later to Thomas Rushton, who was its head (and only) brewer. Brewing rapidly expanded in all of the Australian colonies and by 1871 there were 126 breweries in Victoria alone, which at the time had a population of only 800,000.

Notable events from this period include:

Tasmania was the first Australian colony to tax beer. Its Beer Duty Act of 1880 established a duty of 3 pence per gallon which was raised to four pence in 1892.

By 1900 the number of breweries had begun to dwindle as a result of the recession of the 1890s. In 1901, just after Federation, the new federal government passed the Beer and Excise Act. This act regulated the making and selling of beer and made homebrewing illegal. The provisions in this act, regarded by many as draconian, led to the closure of many breweries. In Sydney 16 out of 21 breweries closed either immediately after the act's introduction or soon afterwards. The remaining breweries began a process of consolidation, with larger breweries buying out the smaller ones. Within a short period of time, only two breweries remained in Sydney: Tooths and Tooheys. In Melbourne, five breweries merged in 1907 to form the giant Carlton and United Breweries.

Since 2011, Kirin-owned Lion Co and AB InBev-owned Foster's Group own every major brewery in Australia, with the exception of Coopers. Boag's Brewery, previously owned by San Miguel, was sold to Lion Nathan for A$325 million in November 2007. In 2006 Boag's Brewery reported total revenues of A$92 million.

Although Foster's Lager is not a popular domestic beer in the 21st century, its popularity internationally has grown and the product is made mostly for export. In January 2005, the brand was one of the ten best-selling beers globally.

The introduction of the Tap King product by Lion Nathan in mid-2013 caused controversy due to the perceived impact upon alcohol venues. The product is a home draught beer dispenser and raised concerns regarding lower patronage rates for venues due to a greater incentive for consumers to drink beer in home environments. The product is sold with a CO2 gas chamber that is cooled for eight hours prior to use.

All content from Kiddle encyclopedia articles (including the article images and facts) can be freely used under Attribution-ShareAlike license, unless stated otherwise. Cite this article:
Beer in Australia Facts for Kids. Kiddle Encyclopedia.