Kids Encyclopedia Facts
For other rivers of the same name, see Bell Creek.

Bell Creek (also known as Escorpión Creek) is a 10-mile-long (16 km) tributary of the Los Angeles River, in the Simi Hills of Ventura County and the San Fernando Valley of Los Angeles County and City, in Southern California. 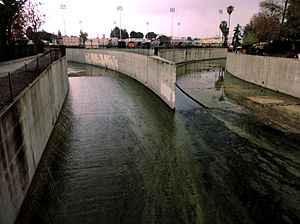 The initial headwater feeder-streams begin in the Simi Hills in Ventura County from 90% of the Rocketdyne Santa Susana Field Laboratory (SSFL) property as its watershed, leaving the site with toxic substances and radionuclide contamination via culvert outfalls, aquifer seeps and springs, and surface runoff. It then flows as a creek southeast through Bell Canyon (the community and geographic feature), Bell Canyon Park, and El Escorpión Park in a natural stream bed. It then is altered to flow in a concrete channel. Moore Creek joins in from the west, and then it flows east, channelized through West Hills, where it is joined by the South Fork and South Branches of the same name and by Dayton Creek. Then on through Canoga Park to join Arroyo Calabasas (Calabasas Creek) and becoming the Los Angeles River.

From mouth to source (year built in parentheses):

All content from Kiddle encyclopedia articles (including the article images and facts) can be freely used under Attribution-ShareAlike license, unless stated otherwise. Cite this article:
Bell Creek (Southern California) Facts for Kids. Kiddle Encyclopedia.