Belle Fourche ( bel-FOOSH) is a city in and the county seat of Butte County, South Dakota, United States. Its population was 5,617 at the 2020 census. It is near the geographic center of the 50 U.S. states.

Belle Fourche (French for "beautiful fork") was named by French explorers coming from New France, referring to the confluence of what is now known as the Belle Fourche and Redwater Rivers and the Hay Creek. Beaver trappers worked these rivers until the mid-19th century, and Belle Fourche became a well known fur trading rendezvous point. During and after the gold rush of 1876, farmers and ranchers alike settled in the fertile valleys, growing food for the miners and their work animals. At the same time, the open plains for hundred of miles in all directions were being filled by huge herds of Texas and Kansas cattle. Towns sprang up to serve the ever-changing needs of the farmers and ranchers. In 1884, the Marquis de Mores, a French nobleman and contemporary of Theodore Roosevelt, established a stagecoach line between Medora, North Dakota, and Deadwood, South Dakota. The Belle Fourche way station included a stage barn and a saloon. 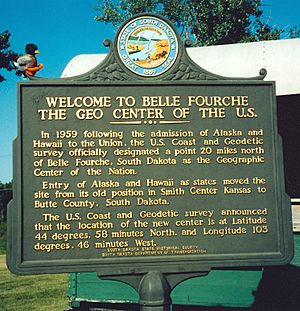 Commemorating the geographic center of the fifty states

Knowing the cattle barons and the railroad would need a point at which to load the herds of cattle onto freight cars for shipment to the packing plants in the Midwest, Seth Bullock provided a solution and became the parent, in effect, of Belle Fourche, the city. After serving in the Montana legislature in 1871–1873 (and being instrumental in the establishment of a National Park at Yellowstone), he had come to the Black Hills to cash in on selling supplies to the Deadwood miners, arriving August 2, 1876, the day Wild Bill Hickok was murdered.

During the next 14 years, Bullock acquired land as homesteaders along the Belle Fourche River "proved up" and sold out. When the railroad came to the Hills and refused to pay the prices demanded by the nearby township of Minnesela, he was ready. Seth offered the railroad free right-of-way and offered to build the terminal if the railroad would locate it at a point on his land, near where the present Belle Fourche Livestock Exchange exists. In 1890, the first train load of cattle headed east. By 1895, Belle Fourche was shipping 2,500 carloads of cattle per month in the peak season, making it the world's largest livestock-shipping point. This was the start of the agriculture center of the Tri-State area for which Belle Fourche would become known.

After winning a competition with Minnesela over the railroad which now goes through Belle Fourche, Bullock's town went on to win the county seat in the election of 1894. Still, cowboys rode into Minnesela and stole the county books.

Belle Fourche today serves a large trade area of ranches and farms. The wool, cattle, and bentonite industries have been important to the growth of Belle Fourche. The city serves as gateway to the northern Black Hills.

There were 2,322 households, of which 32.8% had children under the age of 18 living with them, 46.0% were married couples living together, 12.0% had a female householder with no husband present, 5.0% had a male householder with no wife present, and 37.1% were non-families. 32.6% of all households were made up of individuals, and 13% had someone living alone who was 65 years of age or older. The average household size was 2.36 and the average family size was 2.96.

In the movie The Cowboys (1972) starring John Wayne, the final destination of the cattle drive was Belle Fourche.

All content from Kiddle encyclopedia articles (including the article images and facts) can be freely used under Attribution-ShareAlike license, unless stated otherwise. Cite this article:
Belle Fourche, South Dakota Facts for Kids. Kiddle Encyclopedia.