Benjamin Stoddert Ewell (June 10, 1810 – June 20, 1894) was a United States and Confederate army officer, civil engineer, and educator from James City County, Virginia. He graduated from the U.S. Military Academy at West Point, New York in 1832 and served as an officer and educator.

Although he personally did not favor secession of Virginia from the Union, at the outset of the American Civil War (1861–1865), he helped form local militia in the Peninsula region of Hampton Roads. His work designing and constructing the Williamsburg Line of defensive works of the city and Fort Magruder at its center was a factor in delaying Federal troops attempting to chase retreating Confederates during the Peninsula Campaign, a failed attempt to capture the capital city of Richmond in 1862. His younger brother was Confederate General Richard S. Ewell, a senior commander under Stonewall Jackson and Robert E. Lee.

Benjamin Ewell is best remembered for his long tenure as the sixteenth president of the College of William and Mary in Williamsburg before, during and after the American Civil War. Benjamin Ewell's tireless efforts to restore the historic school and its programs during and after Reconstruction became legendary in Williamsburg and at the college and were ultimately successful, with funding from both the U.S. Congress and the Commonwealth of Virginia.

In 1836, he left West Point and became an assistant engineer of the Baltimore and Susquehanna Railroad, connecting Baltimore, Maryland with Sunbury, Pennsylvania, from 1836 until 1839.

In 1848, he accepted a position as professor of mathematics and acting president of the College of William and Mary in Williamsburg, Virginia. He purchased a farm in nearby James City County west of the old colonial capital city along the Richmond-Williamsburg Stage Road (now U.S. Route 60) and built a large plantation house there which became known as Ewell Hall. He was later named permanent president, and served in that capacity between 1854 and 1888, even between 1861 and 1865 when the college was in abeyance.

In 1861, he became captain of the college militia. Enlistments in the Confederate States Army depleted the student body, and on May 10, 1861, the faculty voted to close the college for the duration of the conflict. The College Building was used as a Confederate barracks and later as a hospital, first by Confederate, and later Union forces.

Although he had been opposed to secession for Virginia, during the American Civil War, he joined the regular forces. The 32nd Virginia Infantry was accepted into Confederate service on July 1, 1861, after it had been formed for local defense at Hampton by Ewell from several local militia units from Elizabeth City County, Warwick County, York County, and James City County. He was commissioned as a colonel in the Confederate Army. In 1861 and 1862, under General John B. Magruder and the Army of the Peninsula, Ewell had the primary responsibility for developing and constructing the Williamsburg Line, a line of defensive fortifications across the Virginia Peninsula east of Williamsburg anchored by College Creek a tributary of the James River on the south and Queen's Creek, a tributary of the York River on the north. A series of 14 redoubts were built along the line, with the earthen Fort Magruder at the junction of the two main loads leading from the lower Peninsula to the east, the Williamsburg-Yorktown Road, and the Lee's Mill Road.

Following the Battle of Williamsburg on May 5, 1862, during the Peninsula Campaign, with 3,800 Confederate and Union casualties, Williamsburg and the College of William and Mary were occupied by the Union Army. The Brafferton building of the college was used for a time as quarters for the commanding officer of the Union garrison occupying the town. On September 9, 1862, drunken soldiers of the 5th Pennsylvania Cavalry set fire to the college building, purportedly in an attempt to prevent Confederate snipers from using it for cover. Much damage was done to the community during the Union occupation, which lasted until September 1865.

After the Battle of Williamsburg, Ewell left the 32nd Virginia Infantry to join the staff of General Joseph E. Johnston. He was later adjutant to his younger brother, General Richard S. Ewell, who was a senior commander under Stonewall Jackson and Robert E. Lee.

Post-war: Restoration of the College of William and Mary 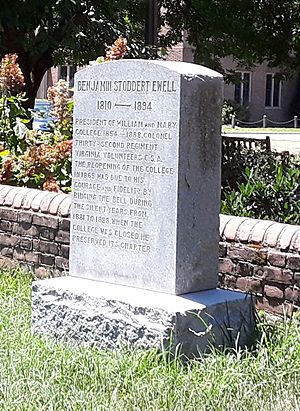 Ewell's grave on the college campus

After the war, the college and its building lay in ruins, and the Virginia economy was destitute. Ewell had opposed Virginia's secession from the Union in 1861. He went to Washington, D.C., and unsuccessfully sought reparations from the U.S. Congress, speaking there several times in an attempt to gain appropriations for the college for the damages done during the War. Some payment was finally made by the U.S. Government, but not until 1893.

In 1869, Ewell finally re-opened the school with his own personal funds and became president of the College of William and Mary again. He mortgaged his family farm, purchased nearby in 1858, and it was lost to a foreclosure and auction sale. Despite Ewell's efforts, the college was forced to close again for financial reasons in 1881 did not reopen until 1888.

It has become legendary at the college and in the Williamsburg community that, every single morning of that long seven-year period, Benjamin Stoddert Ewell would arise and ring the bell calling students to class, so it could never be said that William and Mary had abandoned its mission to educate the young men of Virginia.

In 1888, William & Mary resumed operations under a substitute charter when the Virginia General Assembly passed a bill appropriating $10,000 to support the college as a state teacher-training institution. Once he had ensured that the college he had cherished and protected would survive, the 71-year-old Ewell relinquished the presidency and went into retirement. Lyon Gardiner Tyler (son of US President and alumnus John Tyler) became the 17th president of the college following President Ewell's retirement. 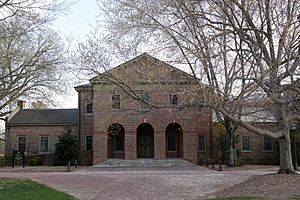 Ewell Hall on the campus of the College of William & Mary

Benjamin Ewell is most-remembered for his tireless efforts to rebuild the College of William and Mary against overwhelming adversity after the American Civil War. Among his memorable words to the U.S. Congress were:

No institution of learning in the South lost so much by the civil war, by actual destruction of property, and by consequent inability to resume its exercises as soon as peace was declared...The College, if this prayer be granted, will rise with renewed vigor, with improved faculties to repay any benificence (sic) which Congress may bestow, by giving again back to the Union what money can not buy, another host of mighty men to guard constitutions and laws, and to love the nation as devotedly as even its liberties.

All content from Kiddle encyclopedia articles (including the article images and facts) can be freely used under Attribution-ShareAlike license, unless stated otherwise. Cite this article:
Benjamin Stoddert Ewell Facts for Kids. Kiddle Encyclopedia.