Bensenville is a village located in DuPage County, Illinois, with a portion of the town near O'Hare International Airport in Cook County, officially belonging to the City of Chicago. As of the 2010 census, the village population was 18,352.

First known as Tioga, it was formally established as Bensenville in 1873 along the Milwaukee Road railway. The community is named after Benzen, Germany. A post office was established in 1873, but because there was an existing "Benson", the suffix "ville" was added.

The Churchville School in Bensenville is listed on the National Register of Historic Places.

There were 6,312 households out of which 36.3% had children under the age of 18 living with them, 48.4% were married couples living together, 11% had a female householder with no husband present, and 33% were non-families. 26.4% of all households were made up of individuals and 9.7% had someone living alone who was 65 years of age or older. The average household size was 2.89 and the average family size was 3.50. 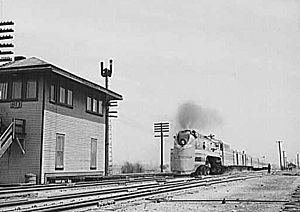 The "Midwest Hiawatha" traveling through Bensenville, 1943

Bensenville has a station on Metra's Milwaukee District/West Line, which provides daily rail service between Elgin and Chicago (at Union Station). From there, passengers can connect to an Amtrak train.

Bensenville is the site of Victory Auto Wreckers, a 7-acre (2.8 ha) junkyard on Green Street which has repeatedly aired the same commercial, starring Bob Zajdel, on Chicago television stations since 1981.

Part of the movie Flatliners was filmed at the old green house that was next to Black Hawk Junior High School in 1990.

The Spilotro brothers were executed in a basement in Bensenville and buried in a cornfield in Indiana as depicted in the movie Casino which depicts the corruption at the Stardust Hotel in Las Vegas. Joe Pesci portrayed one of the Spilotro brothers.

In the television series Boss, a multiepisode story arc involves the main character, Mayor of Chicago Tom Kane (Kelsey Grammer), being damaged by a scandal in which he authorized the dumping of carcinogenic chemicals that soak into the groundwater of Bensenville.

The Christian metalcore band Gwen Stacy recorded the video for their single "The First Words" in an abandoned neighborhood in Bensenville.

All content from Kiddle encyclopedia articles (including the article images and facts) can be freely used under Attribution-ShareAlike license, unless stated otherwise. Cite this article:
Bensenville, Illinois Facts for Kids. Kiddle Encyclopedia.