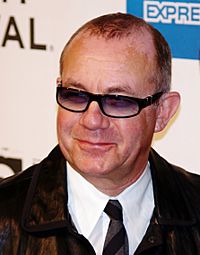 Bernard John Taupin (born 22 May 1950) is an English lyricist, poet, writer, and visual artist. He was born in Sleaford, Lincolnshire. Best known for his long-term partnership with Elton John, having written the lyrics for most of John's songs. Taupin has also worked with Alice Cooper and Willie Nelson.

Notable works by Taupin and John include the songs "Rocket Man", "Levon", "Crocodile Rock", "Tiny Dancer", "Candle in the Wind", "Saturday Night's Alright for Fighting", "Goodbye Yellow Brick Road", "Mona Lisas and Mad Hatters", "Don't Let the Sun Go Down on Me", "Daniel", "Your Song", "I'm Still Standing", "I Guess That's Why They Call It The Blues", "Sacrifice", "The One", "Simple Life", "The Last Song", "Club at the End of the Street" and "Believe". In September 1997, he rewrote the lyrics of "Candle in the Wind" for "Candle in the Wind 1997", a tribute to the late Diana, Princess of Wales.

In 1992, Taupin and John were added to the Songwriters Hall of Fame. In 2005, he was awarded the Golden Globe Award for Best Original Song for "A Love That Will Never Grow Old" for the movie Brokeback Mountain. He was played by Jamie Bell in the biopic movie Rocketman (2019).

All content from Kiddle encyclopedia articles (including the article images and facts) can be freely used under Attribution-ShareAlike license, unless stated otherwise. Cite this article:
Bernie Taupin Facts for Kids. Kiddle Encyclopedia.