Bessbrook is a village in County Armagh, Northern Ireland. It lies about three miles (5 km) northwest of Newry and near the Newry bypass on the main A1 Belfast-Dublin road and Belfast-Dublin railway line. Today the village of Bessbrook straddles the three townlands of Maghernahely, Clogharevan and Maytown. Bessbrook is near Newry railway station.

During the late 20th century some of the worst violence of "the Troubles" took place near the village and it became a military zone with a large garrison. The small village became the busiest (military) heliport in Europe.

Bessbrook is named from Elizabeth or Bess Nicholson, wife of Joseph Nicholson whose family had carried on a linen business in the district from 1806 until 1845. The 'brook' is a stream which runs through the outskirts of the village.

Bessbrook was founded by John Grubb Richardson in 1845 as a 'model village', with spacious streets and squares surrounding a large linen mill owned by the Quaker Richardson family. As a social experiment it is similar to the model of the better-known Bournville company town founded by the Cadbury family near Birmingham, England, however it predates this development by more than 30 years. It is likely that the precedent on which it was based was the industrial village at Portlaw, County Waterford, Ireland, founded in 1825 by the Quaker Malcolmson family.

Among the principles on which the village was based was a philosophy of "Three P's": there should be no public houses, no pawn shops, and consequently no need for police. It was John Grubb Richardson's belief that without a public house there would be no need for a pawn brokers or police station. To this day there are no public houses in the village. Nor are there any pawn shops, although nowadays there is a Police Service of Northern Ireland (PSNI) station. In 1885 the hydro-electrically powered Bessbrook and Newry Tramway opened. 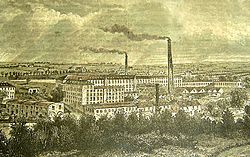 At one time, Bessbrook linen was among the finest in the world, and the linen mill provided most of the employment in the village. Tenement houses were constructed for the mill workers, many of which were of such good quality that they are still inhabited today. Each house also had an allotment garden for the growing of vegetables, and the area of the village where they were situated is still known as 'The Gardens', although the allotments themselves have been replaced by further housing. Most of the buildings in the village are constructed of granite, which is abundant locally.

In the frequently segregated communities of Northern Ireland, Bessbrook is an unusually mixed village, with representation of Anglican, Methodist, Presbyterian and Roman Catholic denominations. The village also has a Quaker meeting house. This is set in the demesne of The Woodhouse, which was inhabited by the Richardson family until the 1980s, and of Derrymore House – also a Richardson property until bequeathed to the National Trust, it was once the home of Isaac Corry MP. The area has been designated an historic park. Football in Bessbrook has been steeped in history. Well known footballing families, like The Carroll's and Feehans have produced a long line of professional and semi professional footballers.

Main page: The Troubles in Bessbrook

Bessbrook saw much of the worst violence in the Troubles. The linen mill was converted by the British Army into a major military base. A helicopter landing area was established to supply other military outposts in the area since road-borne movements of troops and supplies were vulnerable to landmine attack. At one stage the little village was reportedly the busiest helicopter airport in Europe.

The end of the Troubles, following the signing of the Good Friday Agreement in 1998, has led to some recovery for the village. Traffic restrictions have been relaxed and the visible security presence has been reduced. It has been confirmed that the local police station will be disposed of within the current financial year, one of twenty-six stations that the Police Service of Northern Ireland has announced will be closing due to cost efficiency measures.

All content from Kiddle encyclopedia articles (including the article images and facts) can be freely used under Attribution-ShareAlike license, unless stated otherwise. Cite this article:
Bessbrook Facts for Kids. Kiddle Encyclopedia.