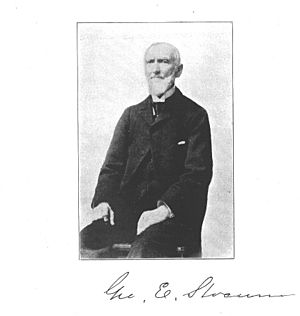 The story of this tiny micro-conurbations in the Town of Wheatland has been told by Carl F Schmidt, an architect, and George Engs Slocum, a local writer whose history of the town appeared in the very early twentieth century.

In 1952-1953, Schmidt wrote History of the Town of Wheatland: Scottsville Mumford Garbutt Belcoda Beulah Wheatland Center and published it in June 1953. The more titularly economical Slocum wrote Wheatland, New York in 1906; it was published posthumously in 1908.

All content from Kiddle encyclopedia articles (including the article images and facts) can be freely used under Attribution-ShareAlike license, unless stated otherwise. Cite this article:
Beulah, New York Facts for Kids. Kiddle Encyclopedia.