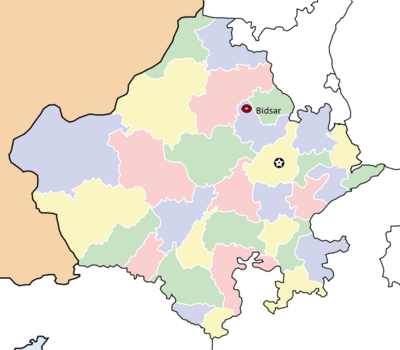 Location of Beedsar in Sikar district 6 km west of Nawalgarh

Bidsar (बीदसर) or Beedsar is a village in the Laxmangarh tehsil of the Sikar district of Rajasthan state in India. 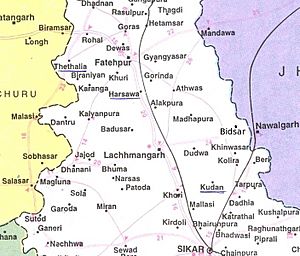 Location of Bidsar in Sikar District.

The village is 21 kilometres (13 miles) east of Laxmangarh and 6 kilometres (3.7 miles) from Nawalgarh. The borders villages and towns including Birodi Bari, Bidasar, Mirzwash, Dundlod and Nawalgarh. On the road into the village there is a well that supplies water to the village next to an abandoned well. On the left side of the road is a common area for Holi celebrations. There are many houses and a few shops to the left of the same road in village common area. One Banyan tree is planted by late Shree Ramu Ram Garhwal. The village school is on the right of the road to Laxmangarh leads to the Government Secondary School.

About 80% (1500) of the population are engaged in farming. Village agriculture is dependent on the monsoon rains although today many farms use artesian wells for irrigation.

Bidsar is connected by a two lane asphalt road to Laxmangarh and Nawalgarh. Nawalgarh Railway station 8 km from Bidsar, is the nearest railway station, which is well connected from Jaipur, Delhi and other cities.

The villagers claim to be fully literate while all children now attend school. However, many women remain illiterate, although literacy rates are improving. Many students of the village have obtained admission to pioneering engineering institutes as well as into medical colleges.

All content from Kiddle encyclopedia articles (including the article images and facts) can be freely used under Attribution-ShareAlike license, unless stated otherwise. Cite this article:
Bidsar Facts for Kids. Kiddle Encyclopedia.