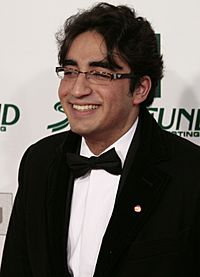 Bilawal Bhutto Zardari (Urdu: بلاول بھٹو زرداری) (born 21 September 1988) is co-chairman of the Pakistan Peoples Party (PPP), and the eldest child and only son of the late Pakistani politician and former Prime Minister Benazir Bhutto and her husband Asif Ali Zardari, the former President of Pakistan. Chairman Bhutto Zardari is also the grandson of Zulfiqar Ali Bhutto, a former Prime Minister of Pakistan. After completing his studies from the United Kingdom in 2013, Bilawal took over the formal charge of the PPP and made changes in it.

In the 2018 general election, he ran for Prime Minister of Pakistan but ended in third place loosing to Imran Khan.

All content from Kiddle encyclopedia articles (including the article images and facts) can be freely used under Attribution-ShareAlike license, unless stated otherwise. Cite this article:
Bilawal Bhutto Zardari Facts for Kids. Kiddle Encyclopedia.