The three hilltops comprising The Lickeys—Bilberry Hill, Rednal Hill and Cofton Hill—form the northern extremity of the Lickey Ridge, a formation of hard quartzite. Views over Birmingham and the surrounding countryside can be seen from the top of these hills.

The hill is named after the tracts of Bilberry (Vaccinium myrtillus) bushes that cover the hill, between the pathways. Local people have been cropping the bushes of their fruit each autumn for hundreds of years to make jams, preserves or apple and bilberry pies. 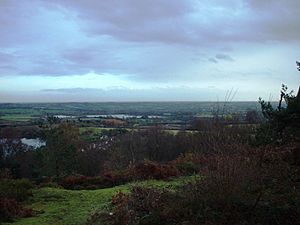 In 1888 the Birmingham Society for the Preservation of Open Spaces purchased Rednal Hill and handed it to the City in trust. In 1913 they also arranged for Bilberry Hill and Pinfold Wood to be leased to the city on a nominal peppercorn rent in perpetuity. Birmingham City Council finally purchased Cofton Hill, Lickey Warren and Pinfield Wood outright in 1920. With the eventual purchase of the Rose Hill Estate from the Cadbury family in 1923, free public access was finally restored to the entire hills with what would become the Lickey Hills Country Park in 1971.

The Bilberry Hill Centre is a hostel and sports facility, run by Birmingham Clubs for Young People, nestling at the base of Bilberry Hill. The building was donated to the people of Birmingham by Mr. and Mrs. Barrow Cadbury in 1904 as the Lickey Tea Rooms and remained in use as a restaurant until the early 1960s. The hostel can accommodate up to 65 persons. In the winter of 2008 the centre was under threat of imminent closure over funding issues and there was an internet campaign to save the facility for future use by young people. 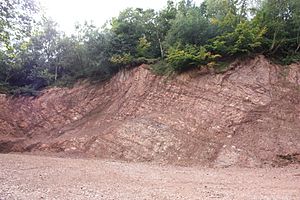 A quarry cutting on Bilberry Hill through the Lickey Quartzite.

The Lickey Hills area is of significant geological interest due to the range and age of the rocks. The darker quartzite making up Bilberry Hill shows signs of having been deposited as sand at the bottom of a shallow sea. The stratigraphic sequence, which is the basis for the area's diversity of landscape and habitat, comprises:

The soil is marl and the subsoil gravel, sand and clay. There is a small quarry where Wenlock limestone was worked at the time of the making of the Worcester and Birmingham Canal, and there are some gravel-pits.

All content from Kiddle encyclopedia articles (including the article images and facts) can be freely used under Attribution-ShareAlike license, unless stated otherwise. Cite this article:
Bilberry Hill Facts for Kids. Kiddle Encyclopedia.