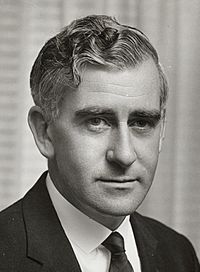 Snedden was born in West Perth, Western Australia. He studied at Highgate State School, Perth Boys' School and at Perth Technical College. Snedden was in the Royal Australian Air Force during World War II. In 1950, he married Joy Forsyth. They had four children together.

On 27 June 1987, Snedden died at his home in Ruschcutters Bay, New South Wales, near Sydney of a heart attack. He was 60 years old.

All content from Kiddle encyclopedia articles (including the article images and facts) can be freely used under Attribution-ShareAlike license, unless stated otherwise. Cite this article:
Billy Snedden Facts for Kids. Kiddle Encyclopedia.