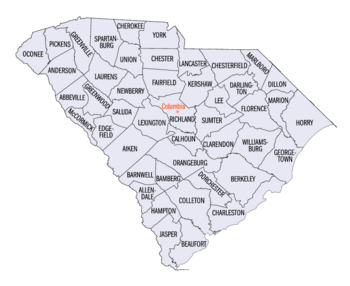 Birch County is a proposed county in the Midlands region of South Carolina. The county would comprise portions of northern Lexington County and northwestern portions of Richland County, including the communities of Ballentine, Irmo, and Chapin. Although subject to change, the proposed county's name would be derived from the first letters of these communities, Ballentine, Irmo, and Chapin.

The move to create Birch County stems from citizens and businesses that are upset with tax and regulatory policies in Richland and Lexington counties. In December 2012, Rep. Nathan Ballentine, who resides in Chapin and represents District 71 in the South Carolina House of Representatives, said "chances are slim to none it would ever happen."

The area which would become Birch County has historically been considered to be part of South Carolina's Dutch Fork region, an area that was settled predominantly by German immigrants in the 1700s. Due to excellent arable land and access to waterways, the area was dominated by farming and remained rural in character for much of its history. While much of the proposed county remains rural, suburban development in the past few decades has increased the population and changed the characteristics of the area. The area is now best known for its middle class and affluent suburbs in the Columbia metropolitan area.

Since the damming of the Saluda River and the creation of Lake Murray in the 1920s, Chapin and the northern unincorporated portions of Lexington County have not physically connected to the remainder of county, causing significant logistical issues for residents and public services. Northwestern Richland County has also had differing opinions on taxation and growth management than the balance of Richland County (especially Columbia), thus leading to a push for Birch County.

The proposed boundaries of the county could likely be conterminous with the Lexington & Richland County School District Five. If created, the county would be the smallest-sized county in the state. It is anticipated that the county would be bordered by Lake Murray and the existing city limits of Columbia and West Columbia to the south, by the Broad River to the east, and by Newberry County to the north and west. Communities that would be included in Birch County include Ballentine, Irmo, Chapin, Lake Murray, and White Rock.

All content from Kiddle encyclopedia articles (including the article images and facts) can be freely used under Attribution-ShareAlike license, unless stated otherwise. Cite this article:
Birch County, South Carolina Facts for Kids. Kiddle Encyclopedia.