Bitterroot (Lewisia rediviva) is a small perennial herb in the family Montiaceae. Its specific epithet rediviva ("revived, reborn") refers to its ability to regenerate from dry and seemingly dead roots.

The genus Lewisia was moved in 2009 from the purslane family (Portulacaceae) with adoption of the APG III system, which established the family Montiaceae.

The plant is native to western North America from low to moderate elevations on grassland, open bushland, forest in dry rocky or gravelly soils. Its range extends from southern British Columbia, through Washington and Oregon east of the Cascade Range to southern California, and east to western Montana, Wyoming, northern Colorado and northern Arizona. 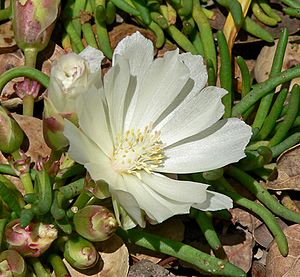 Lewisia rediviva is a low-growing perennial plant with a fleshy taproot and a simple or branched base. The flower stems are leafless, 1–3 centimetres (0.4–1.2 in) tall, bearing at the tip a whorl of 5–6 linear bracts which are 5–10 mm long. A single flower appears on each stem with 5–9 oval-shaped sepals. They range in color from whitish to deep pink or lavender. Flowering occurs from April through July. The petals (usually about 15) are oblong in shape and are 18–35 millimetres (0.7–1.4 in) long. At maturity, the bitterroot produces egg-shaped capsules with 6–20 nearly round seeds.

The thick roots, coming into season in late spring, can be peeled, boiled, and made into a jelly-like food.

The roots were consumed by tribes such as the Shoshone and the Flathead Indians as an infrequent delicacy. Traditionally, the Ktunaxa cooked bitterroot with grouse. For the Ktunaxa, bitterroot is eaten with sugar; other tribes prefer eating it with salt. The Lemhi Shoshone believed the small red core found in the upper taproot had special powers, notably being able to stop a bear attack. 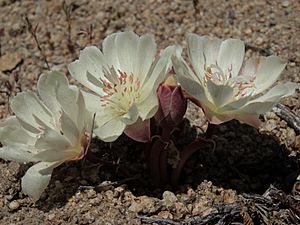 Meriwether Lewis ate bitterroot in 1805 and 1806 during the Lewis and Clark Expedition. The specimens he brought back were identified and given their scientific name, Lewisia rediviva, by a German-American botanist, Frederick Pursh. Based on Lewis and Clark's manuscript, Pursh labeled it "spatlum"; this apparently was actually a Salishan name for "tobacco".

The bitterroot was selected as the Montana state flower in 1895.

Three major geographic features – the Bitterroot Mountains (running north–south and forming the divide between Idaho and Montana), the Bitterroot Valley, and the Bitterroot River (which flows south–north, terminating in the Clark Fork river in the city of Missoula) – owe the origins of their names to this flower.

All content from Kiddle encyclopedia articles (including the article images and facts) can be freely used under Attribution-ShareAlike license, unless stated otherwise. Cite this article:
Bitterroot Facts for Kids. Kiddle Encyclopedia.