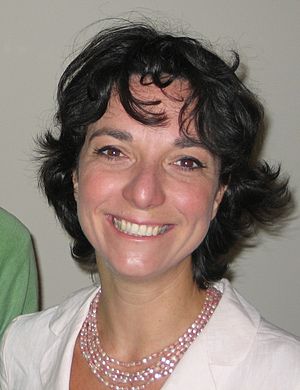 A woman with black hair

Black hair is the darkest and most common of all human hair colors globally, due to larger populations with this dominant trait. It is a dominant genetic trait, and it is found in people of all backgrounds and ethnicities. It has large amounts of eumelanin and is less dense than other hair colors. Sometimes very dark brown (blackish-brown) hair is mistaken for black. In English, black hair is sometimes described as soft-black, raven black, or jet-black. The range of skin colors associated with black hair is vast, ranging from the palest of light skin tones to dark skin. Black-haired humans can have dark or light eyes.

This is likely the original hair color of Homo sapiens, and is found in its greatest distribution in Asia, pre-Columbian Americas and Africa. Black hair is also particularly common in people of Asia, Eastern Europe, Latin America, Southern Europe and Africa regardless of ethnolinguistic affiliation. It is notably concentrated among Celtic peoples of Europe. For example, the Spanish, French, Portuguese, Irish, Welsh and Cornish are particularly noted for their straight or wavy black hair, and it can be combined with either dark (such as brown) or light (such as green, gray or blue) colored eyes. Irish people with these traits are sometimes known as the "Black Irish". Though this characteristic can be seen in people throughout the United Kingdom, it becomes more common in Eastern Europe.

Dark haired people, ranging from dark chestnut and deep brown to black, with either dark or light colored eyes, can also be seen among the Indo-European and non-Indo-European ethnic groups in Iran, the Caucasus, Central Asia, Afghanistan and North India. Hair is naturally reflective, so black hair isn't completely dark in bright light. However, the darkest shade is deep enough that it doesn't give the reflection a warm, neutral tone. Instead, the sheen can seem almost blue, like the iridescence of a raven's wing. Thus, it's known as raven-black. It's found in people of African, Latin American, South Asian and Southeast Asian descent.

All content from Kiddle encyclopedia articles (including the article images and facts) can be freely used under Attribution-ShareAlike license, unless stated otherwise. Cite this article:
Black hair Facts for Kids. Kiddle Encyclopedia.