Blakeview is a northern suburb of Adelaide, South Australia. It is located in the City of Playford. Blakeview is predominantly a residential suburb, but also has two commercial areas and two education areas.

Blakeview is located to the northeast of Elizabeth and lies on the east side of Main North Road opposite Smithfield and Munno Para. There is a commercial area facing Main North Road in the oldest part of the suburb which includes a Coles Express service station and medical services. The Blakes Crossing subdivision north of Craigmore Road also has a commercial area, which includes Woolworths and Aldi supermarkets.

Blakeview was gazetted as a suburb in 1990, taking territory from Smithfield and Munno Para. 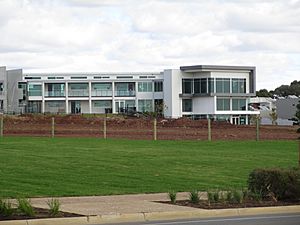 The southern education precinct in Blakeview includes Blakeview Primary School on Omega Drive, Trinity College Blakeview adjacent to it on Park Lake Boulevard, with Craigmore High School next along, and a preschool centre across the road.

Blakes Crossing Christian College operated by Christian Community Ministries opened for reception to year 5 in 2014 and intends to gradually extend to year 12 and a total of 700 students. At the beginning of 2014 it had only six students enrolled, using the Lend Lease land sales offices for classrooms until the school's own buildings could be constructed. It is now sited in its own buildings, not far from the Blakes Crossing shopping precinct and parks.

There are several parks and reserves throughout the suburb, especially along Smith Creek and Main Terrace. Many of the parks are provided with playground equipment.

Blakeview is serviced by public transport run by the Adelaide Metro.

All content from Kiddle encyclopedia articles (including the article images and facts) can be freely used under Attribution-ShareAlike license, unless stated otherwise. Cite this article:
Blakeview, South Australia Facts for Kids. Kiddle Encyclopedia.