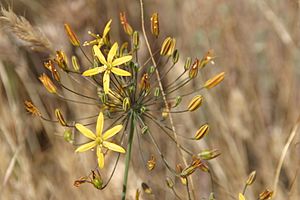 Bloomeria crocea, also known as goldenstar, is a geophyte from southern California and northern Baja California. It is found along hillsides, in grassland and chaparral edges, and in dry flats.

The Bloomeria crocea corm has a fibrous exterior and usually produces only one leaf. Plants produce six-petaled golden flowers that are clustered in a loose umbel. When the three-lobed stigma is fertilized, Bloomeria produces capsules that contain small black seeds. The seeds then require three to four years to become a mature plant.

Growing in full sun, Bloomeria crocea prefers porous soil and semi-dry conditions, in the Peninsular, Transverse, and southern California Coast Ranges, and on the Channel Islands. Its distribution is found along the southern coast from Santa Barbara County and western Kern County, through Southern California, down into Baja California.

All content from Kiddle encyclopedia articles (including the article images and facts) can be freely used under Attribution-ShareAlike license, unless stated otherwise. Cite this article:
Bloomeria crocea Facts for Kids. Kiddle Encyclopedia.