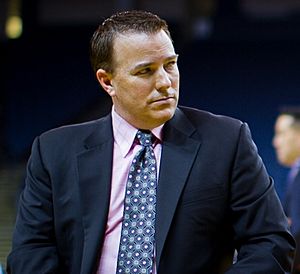 Bob Fitzgerald is a sports announcer. He works for CSN Bay Area, calling games for the Golden State Warriors of the National Basketball Association and San Jose SaberCats of the Arena Football League. He co-hosts Fitz and Brooks on KNBR Radio with Rod Brooks. As a student of Notre Dame University, he called Fighting Irish football and basketball games. He has called National Football League games for Westwood One and currently with Sports USA. He called two Olympic games for NBC: water polo at the 2008 Summer Olympics and basketball at the 2012 Summer Olympics.

All content from Kiddle encyclopedia articles (including the article images and facts) can be freely used under Attribution-ShareAlike license, unless stated otherwise. Cite this article:
Bob Fitzgerald Facts for Kids. Kiddle Encyclopedia.