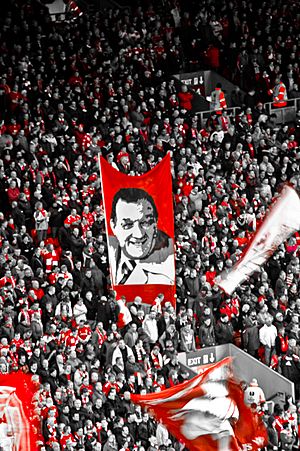 Liverpool fans with a Paisley banner

Robert "Bob" Paisley OBE (23 January 1919 – 14 February 1996) was an English footballer and manager. He played for Liverpool as a left half between 1939 and 1954. He later managed Liverpool between 1974 and 1983. Paisley and Carlo Ancelotti are the only managers to have won the European Cups three times. He won 20 major honours with Liverpool as a manager.

Paisley was born in Hetton-le-Hole, County Durham. He married Jessie in 1946. The couple had two sons and a daughter, Robert, Graham and Christine.

All content from Kiddle encyclopedia articles (including the article images and facts) can be freely used under Attribution-ShareAlike license, unless stated otherwise. Cite this article:
Bob Paisley Facts for Kids. Kiddle Encyclopedia.